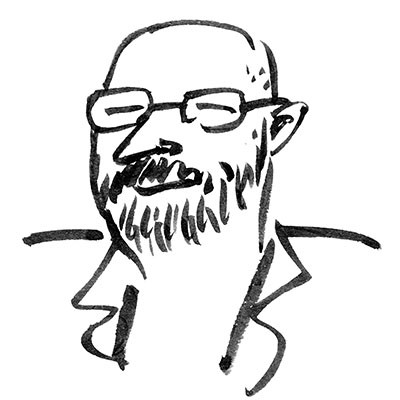 Xavier Gorce is an independent press cartoonist since 1986. Graduated in fine arts, he has worked for a wide variety of newspapers and magazines (Témoignage Chrétien, Passages, Enfants Magazine, CFDT Magazine, Talents, Phosphore, L’événement du Jeudi, Elle, Bon Voyage…). In 2002 he began a regular and daily collaboration with lemonde.fr and, in 2011, his series Les Indégivrables was published (almost) every day in the pages of the daily newspaper Le Monde and other media. Les Indégivrables, a series of short comics of 3-4 strips features penguins in striking gags that pinpoint human news in an offbeat and incisive tone. In addition to this series, Xavier Gorce produces cartoons or illustration for the press and for publishing. His work approach focus on the purity, the gesture, the expressionism, trying to preserve the vibration and the intensity of the primal movement.