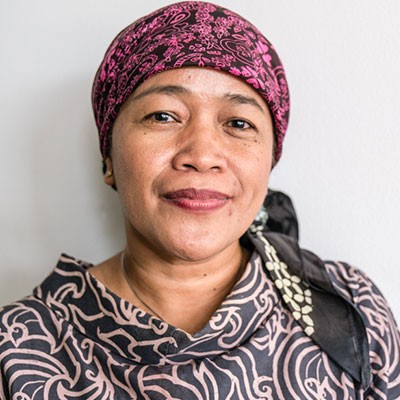 Senior Editor of Tempo Institute and its former Executive Director

Mardiyah Chamim was born in May 8, 1969, in Surabaya, East Java, Indonesia. She graduated from Faculty of Biology - Gadjah Mada University in Yogyakarta in 1995. She joined TEMPO Magazine in 1998 until 2009. Mostly she wrote about socio-cultural, health, environment and science issues. In 2009, she was assigned to run Tempo Institute with a focus on journalism and media development. In August 2011, she was awarded the “Senior Journalist Fellowship- East West Center”, a prestigious fellowship. The program aims to bridge the gap between the West and Muslim worlds. She did investigative reporting and published a book “Giant Pack of Lies”, 2011, which exposed the practices of big tobacco corporations through their own top secret internal documents.

During her time in as leader in Tempo Institute, 2009 - 2019, Mardiyah running several program of investigative report collaboration. One of the program is “Investigative Fund”, an excellent cooperation with Free Press Unlimited (FPU), a program that encourages Indonesian journalists to do investigative reports. She earned the SOPA Award in 2018 for her work. As of April 1st, Mardiyah has resigned from her position as Director of Tempo Institute and decided to be a freelance journalist. She remains involved in Tempo Institute as part of an expert team tasked with developing an online learning journalistic module and building global partnerships in journalism. For now, she is part of Tempo Institute’s team, in cooperation with UNESCO, to build a MOOC online learning for climate change modules for journalists.

Mardiyah has a personal interest for the issue of gender equality. She is now starting to develop “Puan Indonesia” or Indonesia Women, a platform that reflects the multiple faces, souls and spirits of Indonesian women.