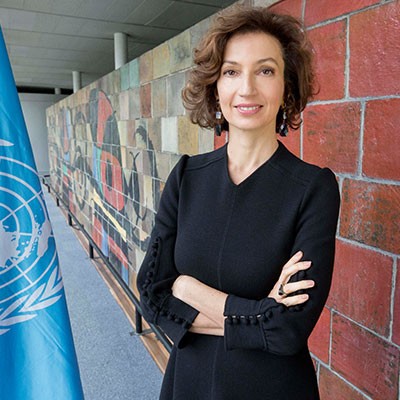 Audrey Azoulay has been the Director-General of UNESCO since November 2017.

Involved in the cultural sector since the start of her professional career, she has, among other things, worked on the financing of the French public audiovisual sector and the reform and modernization of French film support systems. She has also served as an expert with the European Commission on issues concerning cultural and communication. As Cultural Advisor to the President of the French Republic, she notably initiated, in 2014, the design of a plan for the protection of heritage at risk, which she then implemented in 2016 as Minister of Culture and Communication. A former student of the French Ecole Nationale d’Administration, she graduated from Institut d’Etudes Politiques de Paris and holds a Diploma of Business Administration from Lancaster University (United Kingdom).

With her longstanding commitment to intercultural and intergenerational dialogue for promoting education for all and the dissemination of scientific and cultural knowledge, Audrey Azoulay is continuing this commitment as the Director-General of UNESCO. Among her priorities at the head of the Organization, she is placing a particular focus on education, especially for women and girls, as a powerful lever for development. She notably launched the initiative "Revive the Spirit of Mosul", which focuses on the human dimension of reconstruction through education and culture. UNESCO has also initiated a global conversation with the public and private sectors and civil society to define ethical principles for a humanist approach to artificial intelligence.