International Day of Women and Girls in Science 2018

The International Day of Women and Girls in Science, celebrated on 11 February, is implemented by UNESCO and UN-Women, in collaboration institutions and civil society partners that aim to promote women and girls in science.

Over the next 15 years, scientific research will play a key role in monitoring relevant trends in such areas as food security, health, water and sanitation, energy, the management of ocean and terrestrial ecosystems and climate change. Women will play an essential role in implementing the Sustainable Development Goals, by helping to identify global problems and find solutions. 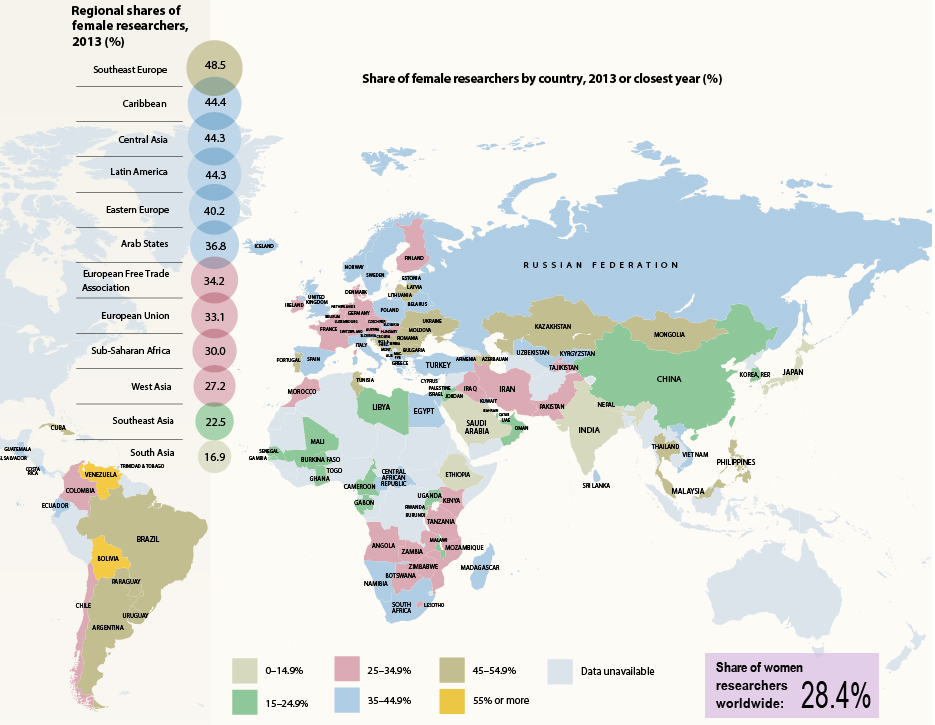 Source: Is the gender gap narrowing in science and engineering? (pdf) UNESCO Science Report, Towards 2030

Despite the remarkable gains that women have made in education and the workforce over the past decades, progress has been uneven. According to UNESCO Institute for Statistics (UIS), only 28% of the world’s researchers are women. Women are still underrepresented in the fields of science, technology, engineering and mathematics (STEM), both at graduate and research levels. Even in those scientific fields where women are present, they are underrepresented in policy-making and programming.

Each step up the ladder of the scientific research system sees a drop in female participation until, at the highest echelons of scientific research and decision-making, there are very few women left. Science remains one of the few sectors where gender bias is common and considered acceptable by some. The number of women who have been recognized as leaders by high-prestige societies or through awards remains low, despite some high-profile exceptions. Lack of recognition of women’s achievements contributes to the misconception that women cannot do science or, at least, not as well as men.

Tackling some of the greatest challenges of the Agenda for Sustainable Development -- from improving health to combatting climate change -- will rely on harnessing all talent. That means getting more women working in these fields. Diversity in research expands the pool of talented researchers, bringing in fresh perspectives,
talent and creativity.

This requires a change in attitudes and challenging stereotypes: girls need to believe in themselves as scientists, explorers, innovators, engineers and inventors.