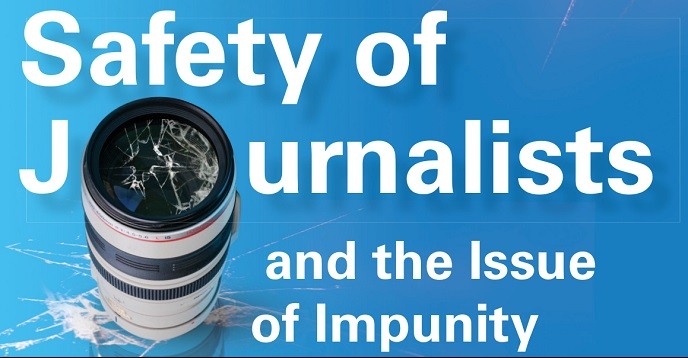 The third UN ­Inter-­Agency Meeting on the Safety of Journalists and the Issue of Impunity took place on 4 November 2014 at the Council of Europe in Strasbourg, France. This meeting, convened by UNESCO and co­-hosted by the United Nations Office of the High Commissioner for Human Rights and the Council of Europe, coincided with the inaugural International Day to End Impunity of Crimes against Journalists on 2 November.

This working meeting reviewed the implementation of the UN Plan of Action on the Safety of Journalists and the Issue of Impunity from 2013 to 2014 including the successes, challenges, lessons learnt and the way forward. The UN Plan of Action was spearheaded by UNESCO and subsequently adopted by the UN Chief Executives Board on 12 April 2012. It marks the first effort to systematically bring the UN family of agencies together with other relevant stakeholders to address the worsening situation of the safety of journalists, media workers, and social media producers, and of the culture of impunity surrounding the crimes against them.
The UN Plan of Action has been highlighted in various international instruments and guidelines including the UN General Assembly Resolution A/RES/68/163, the Human Rights Council Resolution A/RES/HRC/21/12, and the EU Human Rights Guidelines on Freedom of Expression Online and Offline as an important tool in addressing the safety of journalists and combating impunity.
Underlining the multi­stakeholder approach of the UN Plan of Action, representatives from different UN Agencies, Member States, international and regional organizations, academia, and media practitioners themselves participated at the meeting. The breadth and depth of the issues on the safety of journalists require a broad coalition of different stakeholders. Their collective proficiency and resources provide a thorough and broad perspective which is necessary in achieving the overall objective. The first UN­ Inter-­Agency Meeting took place in September 2011 at UNESCO’s headquarters in Paris where the plan was first drafted. A second UN Inter­Agency meeting took place in Vienna in November 2012 where a comprehensive Implementation Strategy was adopted. The strategy included over 120 concrete actions that could be taken on the protection of journalists and its related issues. This Implementation Strategy served as the basis for the review process.
Additionally, on 3 November 2014 a Seminar and Inter­-Regional Dialogue on the Protection of Journalists was co-­organized by UNESCO, Council of Europe, Centre for Freedom of the Media and the European Lawyer’s Union. Representatives ranging from civil society to intergovernmental organisations examined the current legal standards of protection for journalists and discussed the course of action to improve the international framework for their safety and to eradicate impunity.

NGO Statement of Support to UN Plan of Action