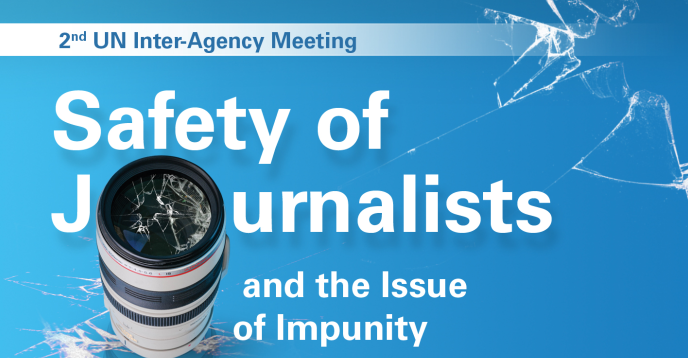 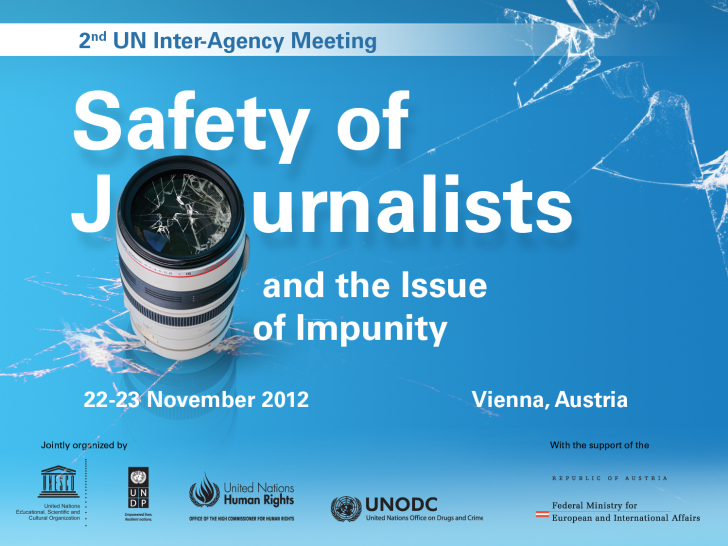 The meeting brought together representatives from 15 UN bodies and more than 40 non­governmental and intergovernmental organizations, independent experts, media groups and professional associations.
The decision to organize this meeting follows the endorsement of the UN Plan of Action on The Safety of Journalists and the Issue of Impunity by the UN Chief Executives Board on 13 April 2012. The purpose of the meeting was to formulate a concrete implementation strategy at global and national levels by outlining more than 100 areas of work by UN bodies and civil society groups to secure the safety of journalists. These areas of work include helping governments to develop laws on safety and freedom of expression, awareness­raising for citizens, training in safety and e­safety, provision of health care, emergency responses mechanisms, conflict zones, decriminalization of defamation, and remuneration of journalists, among others.
Participants pledged that all stakeholders work together and with relevant national authorities to ensure that the recommendations of the UN Plan of Action were applied at the country level. A national experience is going to be launched in a selection of first-phase country, among which are Pakistan, Nepal, South Sudan and Iraq as well as a Latin American country to be selected soon.
Discussions over the two days led to a rich exchange of experiences and ideas on ways to strengthen the role of the United Nations, establishing partnerships with governmental, intergovernmental and other organizations and groups, and working with civil society and media to heighten awareness and foster safety initiatives. A statement was issued by civil society delegates in that sense.
The UN Plan of Action on the Safety of Journalists and the Issue of Impunity was prepared during the first UN Inter-Agency Meeting on this issue, convened by the Director-General of UNESCO at the request of the Intergovernmental Council of the International Programme for the Development of Communication (IPDC).