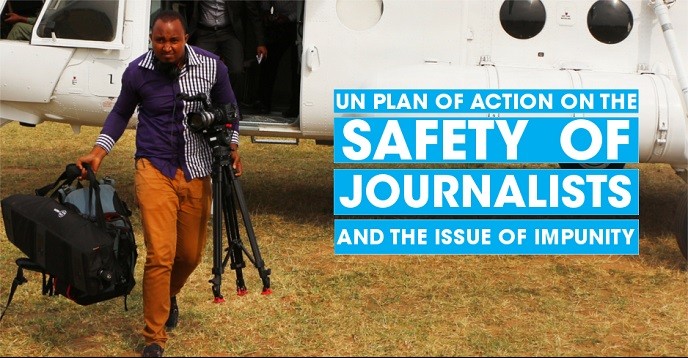 A United Nations Inter-Agency meeting on the Safety of Journalists and the Issue of Impunity took place at UNESCO Headquarters in Paris on 13 and 14 September 2011. On Tuesday 13 September, the meeting was open to all participants, as well as to Permanent Delegations and Observers to UNESCO. The session on Wednesday 14 September was devoted to the preparation of a UN concrete plan of action and was only be open to UN agencies.

The event brought together UN system organizations and provided them with a forum in which to consult with other invited international and regional institutions, professional organizations and NGOs, with a view to formulating a comprehensive, coherent and action-oriented plan of action to address the issue of safety of journalists and the impunity of perpetrators of assaults against journalists.
Over the last ten years, more than 500 journalists and media workers have been killed worldwide, and many more were wounded or injured while carrying out their professional responsibilities. The great majority of casualties were not international war correspondents, but local journalists working in their own countries, mostly in peacetime, and covering local stories. In most of these cases, impunity precludes the way of justice, and if this trend prevails, journalists will remain easy targets.
Attacks on journalists, media professionals and associated personnel include abductions, hostage-taking, harassment, intimidation, illegal arrest, detention and even more, killings. Furthermore the threat of sexual attack is also frequently used as a weapon for silencing women journalists. The conference was organized by UNESCO following the adoption of the Decision on the Safety of Journalists and the Issue of Impunity at the 27th session of the Intergovernmental Council of the UNESCO International Programme for the Development of Communication (IPDC) in March 2010. This Decision requests “the Director-General of UNESCO to consult with Member States on the feasibility of convening an inter-agency meeting of all the relevant UN agencies with a view to formulating a comprehensive, coherent, and action-oriented approach to the safety of journalists and the issue of impunity.”
On the basis of the responses received following a consultation with Member States, Ms. Irina Bokova, Director-General of UNESCO, announced the organization of the meeting on Safety of Journalists and the Issue of Impunity, as part of UNESCO´s role to promote freedom of expression. Ms. Bokova has publicly condemned attacks and the killings of journalists and media professionals (see UNESCO website UNESCO Remembers Assassinated Journalists), reminding the world that “Attacks on the right of journalists to work free from the threat of violence are attacks on everyone’s right to freedom of opinion and expression”.
As a first step towards this event, a meeting entitled Safety and Protection for Journalists: A Responsibility for the World was organized in June 2011 by the Initiative on Impunity and the Rule of Law, which is a joint project between the London City University’s Centre for Law, Justice & Journalism (CLJJ), and the University of Sheffield’s Centre for Freedom of the Media (CFOM). The conclusions drawn from this meeting were presented at the UN Inter-Agency Meeting in Paris.