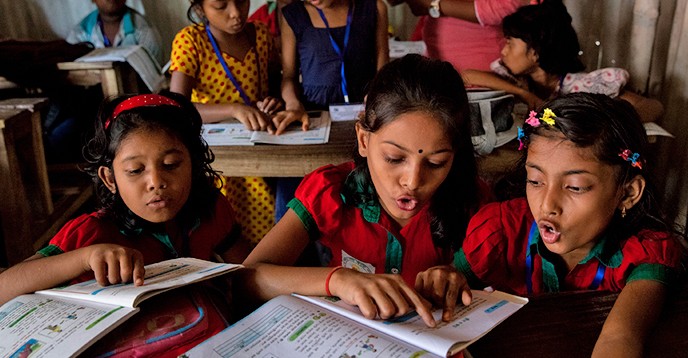 The Education 2030 agenda re-affirms the importance of providing opportunities to reach Global Citizenship Education, which includes the design of inclusive learning environments and the contents of the curriculum.

UNESCO has a long experience in the area of quality textbook development and education; its expertise is related to sustainable textbooks provision; textbooks revision/development; common History textbooks development in a bilateral or multilateral approach.

The development of quality textbooks contributes to the implementation of a number of international instruments that have been ratified by governments to guarantee freedom, equality and non-discrimination, such as the 1974 Recommendation

The UNESCO project, “Toolkit on revision/adaptation of curricula, school textbooks and other learning materials to remove cultural, religious and gender-biased stereotypes” was developed in continuation of the efforts of the Organization to promote a culture of peace. It aims at contributing to the attainment of SDG4 and it will assist Member States in developing quality textbooks and learning resources that reflect values such as diversity and international understanding. It is intended to provide policy makers, authors, researchers and all others involved with the development, distribution and use of textbooks and learning resources with the necessary tools to enhance their quality and relevance.

The Toolkit was produced as a result of the Memorandum of Understanding on Culture of peace and dialogue signed between UNESCO and the Government of the Kingdom of Saudi Arabia.

The three themes culture, religion and gender were chosen for they pertain to diversity. These potentially controversial topics are important aspects of inclusive education and can help shape educational practice in schools. The toolkit is made available online and is published in English, French and Arabic.

In pursuit of Global Citizenship Education (GCED), those resources will aid in updating textbooks to encourage learners to acquire a profound and thorough respect for diversity in its many forms.

In 1964, UNESCO launched the elaboration of the General History of Africa (GHA) with a view to remedy the general ignorance on Africa’s history. To rebuild Africa’s history, freeing it from racial prejudices ensuing from slave trade and colonization, and promoting an African perspective, UNESCO therefore called upon the then utmost African and non African experts. These experts’ work represented 35 years of cooperation between more than 230 historians and other specialists, and was overseen by an International Scientific Committee which comprised two-thirds of Africans.