In 2017, the European External Action Service (EEAS) and the United Nations Educational, Scientific and Cultural Organization (UNESCO) began the implementation of the Project “Protecting Cultural Heritage and Diversity in Complex Emergencies for Stability and Peace”. The Project is an EU External Action funded under the Instrument contributing to Stability and Peace (IcSP), with the implementation of the Project’s activities led by UNESCO.

The Project implements a number of urgently needed activities in Iraq, Libya, Syria and Yemen, to allow for the stabilization and urgent safeguarding of the cultural heritage of these selected countries and their population. Through this support, the EEAS enhances UNESCO’s capacity to respond more rapidly to needs associated with the protection of culture and diversity in complex emergencies, to strengthen the positive role that culture can play in promoting resilient, culturally diverse societies, and in developing more sustainable approaches to inclusive peace and stability in transitional contexts.

Culture is increasingly at the frontline of conflicts, as contemporary armed conflicts tend to involve both state and non-state actors, often engaging along ethnic and/or religious sectarian divides. In the past, belligerents have used the deliberate targeting and destruction of culture to undermine morale, dignity and resilience. Today, however, attacks against culture and acts of “cultural cleansing” are becoming more systematic and large-scale, they contribute to further fuel conflict, and have sometimes been considered indicators of the intent to commit acts of ethnic cleansing. Beyond the physical destruction of cultural heritage, there is the tremendous human impact, with broader protection and human rights implications. There is evidence that the direct targeting of culture contributes to generating or increasing waves of forced displacement.

Faced with such complex challenges, a better integration of a cultural dimension into stabilization and peacebuilding efforts could enhance the effectiveness of the overall response, in a manner complementary to humanitarian aid and long-term cooperation instruments. A key challenge is to turn culture into a positive force and to ensure that diversity and pluralism are guaranteed as an essential component for building peaceful societies. Protecting diversity in the face of conflict and complex emergencies should mean the safeguarding of cultural heritage in all its forms and expressions, including the intangible traditions, practices and expressions that define a community. It should be combined with the promotion of the knowledge and skills necessary to nurture such safeguarding and to ensure its transmission to future generations, as a basis for sustainability and peace.

The Project represents a strong response from the international community to the deliberate targeting of culture and diversity, and a recognition of the essential role of cultural pluralism for stabilization in transitional contexts.

The Project seeks to operationalize both the Joint Communication to the European Parliament and The Council “Towards an EU Strategy for International Cultural Relations” and the “Strategy for the reinforcement of UNESCO’s action for the protection of culture and the promotion of cultural pluralism in the event of armed conflict”, adopted by the UNESCO General Conference at its 38th session in November 2015 through concrete actions that can contribute to the emergence of global systems and tools for a more effective and efficient response.

While UNESCO has traditionally not been part of rapid humanitarian response, demands from Member States require for UNESCO to develop modalities – operationally, administratively and legally - for the rapid deployment of experts to crisis and transitional situations where culture is at risk or where areas that were previously inaccessible become available for responsive action. This modality is a key requirement for the culture sector to be fully taken into account in complex emergency situations and to be able to act where and when needed.

The Project complements and further reinforces ongoing and planned actions by UNESCO. At the central level, UNESCO set up a Heritage Emergency Fund (HEF) in 2015, which operates as a flexible multi-donor modality to finance emergency operations – in particular rapid response operations. In addition to the HEF, UNESCO is setting up a rapid response mechanism to dispatch experts to provide urgent technical assistance, advisory services, and capacity-building for the safeguarding of culture in complex emergencies.

In the framework of the Project, the following activities will be implemented at the Global level.

Deployment of rapid fact-finding or advisory missions
This activity will allow for the deployment of rapid fact finding or advisory missions to Iraq, Libya, Syria, Yemen or other relevant countries and identification of emergency interventions to newly accessible locations. The primary aim of such missions is to assess the situation, determine needs and – when required – implement first aid measures to stabilize the situation until further action can be undertaken.

Improvement of UNESCO’s rapid response capacity for the protection and safeguarding of culture in emergency situations
The deployment of the rapid fact-finding or advisory missions will be used to evaluate and improve the existing rapid response capacities of UNESCO. This will include setting up a roster of experts for rapid response to crisis situations, comprised of national experts from contributing countries as well as from civil society organizations, and developing partnerships and agreements for their mobilization and deployment on the ground.

The ongoing crisis in Iraq has triggered massive internal forced displacement, as populations faced with persecution and sectarian violence based on their religious and ethnic affiliation were obliged to flee their homes and communities. The IDPs, including those belonging to ethnic and religious minorities, often have little or no established cultural links with host communities. There is a risk that disruption of practice of cultural expressions will lead to an irreversible loss of intangible cultural heritage for IDPs. This, in turn, poses a threat to the protection of cultural diversity in Iraq, and undermines the opportunity of capitalizing on the power of culture to overcome social fragmentation and build social cohesion for reconciliation.

In the framework of the Project, the following activities will be implemented in Iraq.

Mobile cultural spaces
In order to ensure access to culture for displaced communities, mobile cultural spaces (such as libraries, theatres, exhibitions) will be provided in areas of concentration of internally displaced populations and their host communities. The spaces will serve to provide cultural services and access to culture for the IDPs and to generate dialogue between the IDPs and their host communities. The spaces will also provide opportunities for celebrating cultural expressions in a participatory and inclusive process, by engaging

Instability and conflict continue to affect many parts of Libya, with a consistent pattern of deliberate vandalism and destruction of Libyan cultural property being observed since the outbreak of widespread fighting in July 2014, including because of the growing strength of extremist armed groups and a general breakdown of effective national institutions.

Recent efforts have allowed for part of main museums‘ collections to be evacuated and transferred to safe storages. However, site-museums still remain at risk of further damage and – especially – of continued illicit trafficking. It is urgent to enforce emergency action in Libya towards an enhanced protection and security of collections and storages, and to put forward a culture of prevention and crisis preparedness.

In the framework of the Project, the following activities will be implemented in Libya.

Evacuation of collections and safe storage
On-the-job training will be organized for Libyan professionals in evacuating collections and securing them in safe storages, including the assessment of museums’ collections for safe keeping and storage upgrading according to best practices and international standards.

Syria holds a very rich cultural heritage that continues to suffer enormously from the ongoing conflict since March 2011. The destruction of its most important monuments, including those on the site of Palmyra, have gained worldwide attention. In addition, local heritage is damaged, large numbers of artefacts are being illicitly trafficked, and intangible practices are being disrupted. Cultural resources represent the common local cultural identity of citizens and the common ground that allows them to revive and strengthen social and cultural cooperation and cohesion. Cultural resources are particularly vulnerable in times of armed conflict, which makes their mapping in Syria a crucial need.

With large numbers of Syrians having left their hometowns, and often living abroad as refugees, this humanitarian crisis also has an important impact on the continuation of culture and assurance of cultural rights of the Syrian population. It is essential for the displaced communities to retain access to their cultural heritage and intangible heritage in particular, for their general well-being, the protection of their rights, and in order to increase the likelihood of sustainable recovery and return. Therefore, it is important to help civil societies create platforms for intercultural dialogue, and increase awareness of cultural diversity as a resource for peace building, good governance, fighting poverty, adaptation to climate change and maintaining sustainable management and use of natural resources.

In the framework of the Project, the following activities will be implemented in Syria.

Documentation and mapping of Syrian cultural resources at risk
In order to respond to the cultural rights situation of the large numbers of displaced Syrians, this Project will work with displaced Syrian communities in Lebanon to identify cultural heritage at risk, safeguarding and transmission needs. In addition, the Project will work with Syrian professionals and displaced communities to ensure a better protection of cultural heritage at risk in Syria – tangible, intangible and movable.

The emergency situation in Yemen caused by the conflict that erupted in 2015 has severely affected Yemen’s unique cultural heritage. The conflict has put at risk museums, movable heritage, tangible and intangible heritage throughout the country. As a consequence of displacement, people are also deprived of the ability to freely express themselves and participate in cultural activities, impacting people’s identity and the peace and stability of Yemeni society.

In the framework of the Project, the following activities will be implemented in Yemen.

Damage assessment and emergency rehabilitation plans of heritage sites
This activity aims to assess damage (on site and from distance) to heritage sites and devise and implement emergency conservation measures. This activity will allow collecting information on the damage, and destruction, and making it available for mitigating threats to cultural heritage and for sound programming of future actions. It will include localization maps of damaged sites, before and after pictures and information of damaged structures and looted artefacts, as well as information on on-going projects and initiatives to protect and safeguard cultural heritage.

Condition assessments and emergency inventories for movable heritage and repositories, including preventive measures to halt illicit trafficking
This activity will see the assessment of the situation of heritage repositories (museums, libraries, archives) and the implementation of the most urgent safeguarding measures to prevent from further damage or looting.

“First Aid” training
This activity will seek to roll-out a tool for the rapid assessment of damage to cultural heritage developed by ICCROM-ATHAR by building the capacity of people who have access to cultural heritage sites and collections on the ground on how to use the tool in order to collect as much accurate information as possible, and to train them as future trainers of other people in Yemen.

Funded by the European Union 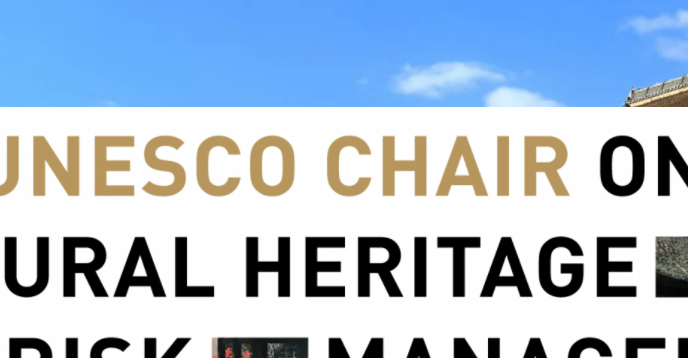 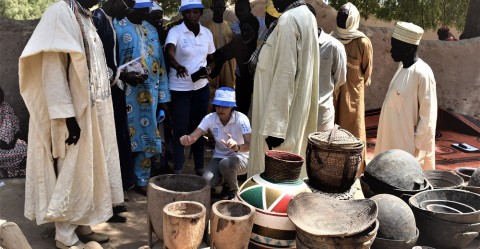 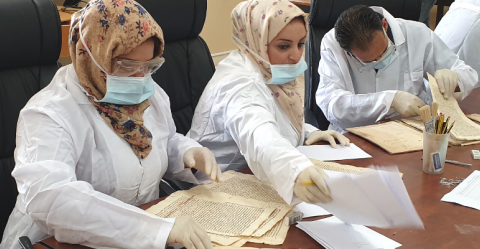 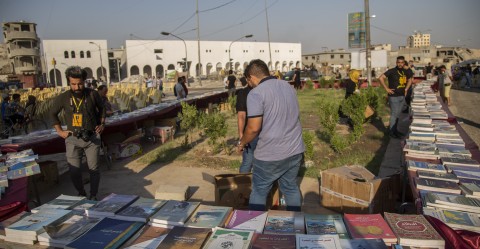