Protecting Great Apes and their habitats

The hominid family is the smallest mammalian family with 7 living species, 6 of which live in the tropical forests of Africa and Asia. The seventh is Homo sapiens, our species. With a common gene pool of between 97% and 98.5%, great apes are our closest cousins in the animal kingdom. In addition to humans, there are 3 genera of great apes: chimpanzees and gorillas in Africa, and orangutans in Asia. They are all endangered, at a high risk of extinction in the wild in the near future, probably within our own lifetime.

With an estimated population of between 518,000 and 688,000 gorillas, chimpanzees and orangutans living in the wild, all Great Ape species are either Endangered or Critically Endangered on the IUCN Red List and CITES Appendix 1, indicating that they are at very high risk of extinction in the wild in the near future, probably within our own lifetime.

The protection of these species, which play a fundamental role in the ecological balance of tropical forests and ecosystems, and thus in adaptation to climate change is essential. Behind the protection of our closest cousins and their habitats, it is "one health" that we are protecting.

There are 2 species of chimpanzees : Pan troglodytes and Pan Paniscus (bonobo). Both can be found in Equatorial Africa.
More information

Gorillas are mainly herbivorous terrestrial apes that live in the forests of Central Africa.
More information

Native to Indonesia and Malaysia, orangutans (Pongo pygmaeus, Pongo tapanuli and Pongo abelii) are only found on the islands of Borneo and Sumatra.
More information

In 2019, 12 million ha of tropical forests were destroyed, including 3.8 million ha of primary tropical forests. This is one of the worst years of deforestation since 2001, the first year of global data recording and an increase from 2018 (3.6 billion ha for primary tropical forests). It is essential to obtain statistics that differentiate between forests and primary forests, habitats of great apes, to understand how deforestation affects them. It is estimated that by 2030, infrastructure development leading to deforestation or habitat fragmentation will have damaged more than 90% of ape habitat in Africa and more than 99% of orangutan habitat in Asia.

Hunted for bushmeat or the live animal trade, poaching is the second greatest threat to great apes. The number of great apes captured each year is unknown. The only known statistics come from confiscations or arrivals of great apes in sanctuaries. The majority of captured great apes arrive at their destinations unhindered. In addition, the catches result in tragic losses in the species. It is estimated that, depending on the species, 1 to 15 individuals are killed for each specimen caught in the trade. Chimpanzees, particularly social, see 5 to 10 members killed for the capture of a kid.

Zoonoses are diseases that are naturally transmitted between animals and humans, and vice versa. The emergence in humans of diseases carried by great apes is a side effect of the hunting of African great apes but also the destruction or fragmentation of great ape habitats that has brought human and animal populations closer together. But humans have also transmitted pathogens that have wreaked havoc in chimpanzee and gorilla populations in particular. In the 1990s, Ebola epidemics in Gabon and the Republic of Congo killed more than 90% or even 95% of gorillas and chimpanzees in some regions. Since then, thousands of great apes have also been decimated by this disease. Similarly, they are particularly vulnerable to respiratory diseases such as coronaviruses. OC43, a human-transmitted strain of coronavirus, was detected in chimpanzees in Côte d'Ivoire a few years ago. The 2020 COVID19 pandemic therefore raises fears of further losses among great apes. 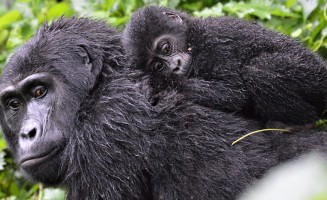 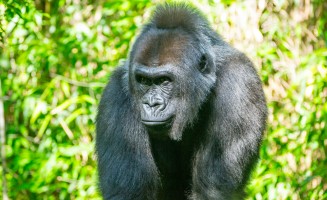 Gorillas test positive to COVID-19: what it means for Great Apes 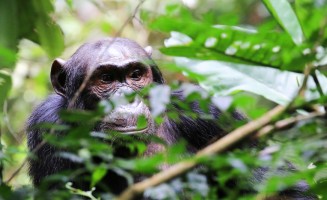 Great apes, loss of biodiversity and COVID-19 - A throwback on the race for knowledge

UNESCO's commitment for the protection of Great Apes

Protection and sustainable management of habitats

Through World Heritage sites and Biosphere Reserves, UNESCO is involved in the protection and sustainable management of Great Ape habitats. National and transboundary protected areas are becoming a last bastion for many great ape taxa. Although they cover only a fraction of the great apes' natural habitat, Biosphere Reserves and World Heritage sites protect all but one Great Ape species through its 36 UNESCO-designated sites in 23 countries: the Cross-River Gorilla. UNESCO is working with Cameroon and Nigeria to designate the Cross-River area as a transboundary biosphere reserve.

Among these, the Gunung Leuser Biosphere Reserve and Sumatra Rainforest World Heritage site cover 100% of the range of Sumatra's Orangutan.

The Gombe Masito Ugalla Biosphere Reserve (Tanzania), designated in 2018, is the historic site where Dr. Jane Goodall began her research on chimpanzees in 1960. It encompasses all the values and missions of the MAB Programme: research programmes centred on nature, conservation efforts, ecosystem restoration, reconciliation between nature and people, sustainable development through controlled tourism, participation of the local communities in the biosphere reserve management and projects and above all, involving youth and raising awareness to protect biodiversity for future generations.

UNESCO promotes local ownership of the conservation and sustainable development efforts. In both World Heritage sites and Biosphere Reserves, communities are at the heart of the management plans and processes. All projects implemented in the sites are community-driven.  For instance, in the Volcanoes Biosphere Reserve, in Rwanda, several projects have been carried out with the communities: studies and research to improve knowledge of the great apes' way of life and habitats, but also education and environmental awareness campaigns for their protection. Furthermore, 20% of the equitable and sustainable tourism revenues are donated directly to local communities.

UNESCO, together with the United Nations Environment Programme, runs Secretariat of the Great Apes Survival Partnership (GRASP). It was launched in 2001 to help ensure the long-term survival of gorillas, chimpanzees and orangutans and their habitat in Africa and Asia. GRASP is a unique alliance of a hundred of members including national governments, research institutions, United Nations agencies, conservation organisations, and private sector actors. GRASP aims to provide a coordinated response to address habitat loss and population declines.

For UNESCO and the United Nations Framework Convention on Climate Change (UNFCCC), "education can bring about a radical change in the way we think, act and take responsibility for each other and for the planet.”
Within this framework, UNESCO is supporting a paradigm shift towards the One Health approach with the public, its Member States and its network. One Health is a collaborative, multisectoral and transdisciplinary approach - working at local, regional, national and global levels - to achieve optimal health and well-being outcomes, recognizing the interconnections between people, animals, plants and their common environments. UNESCO is also increasing awareness raising activities, particularly on the subject of great apes and their habitats.

UNESCO supports the creation of frameworks for dialogue in order to share knowledge about great apes and their habitats. These exchange networks are multiple and concern a varied public, from primatologists to civil society, including managers of protected sites.
Thus, the creation of the AfriMAB sub-network for biosphere reserves that are habitats for great apes enables the exchange of knowledge and best practices related to great apes. Likewise, former laureates of the MAB Young Scientists Award who were selected for their research on great apes and their habitats are put in contact with students in order to bring their research to fruition.
Finally, UNESCO organizes broader events, open to specialists and the greater public, such as the webinars "COVID-19 and biodiversity loss: another threat for great apes? "organized in June 2020, which promoted the exchange of best practices between African and South Asian biosphere reserves for the protection of great apes in the midst of a pandemic, but also the exchange of knowledge on zoonoses, their transmission and how to protect against them.

Monitoring and surveying Great Apes and their habitats

In partnership with the French National Museum of Natural History and the Sebitoli Chimpanzee Project (Uganda), UNESCO is developing a project to monitor the habitat of great apes with the use of drones and training technicians in the use of these tools and interpretation of data in biosphere reserves. The aim of the project is to establish a harmonized data collection protocol and create an up-to-date database on the state of great apes habitat inside and outside protected areas in the range states, as well as on other information such as feeding resources and behaviour. It also aims to track illegal activities in order to better adapt the conservation of these species. The use of UAVs reduces human disturbance in protected areas and prevents any risk of transmission of zoonotic diseases.
With an approach to the project under the One Health paradigm, the data collected will establish the link between a healthy environment and healthy apes, further improving knowledge about great apes and better identifying and understanding the factors and consequences of the threats they face.

COVID-19 and biodiversity loss: another threat to great apes? 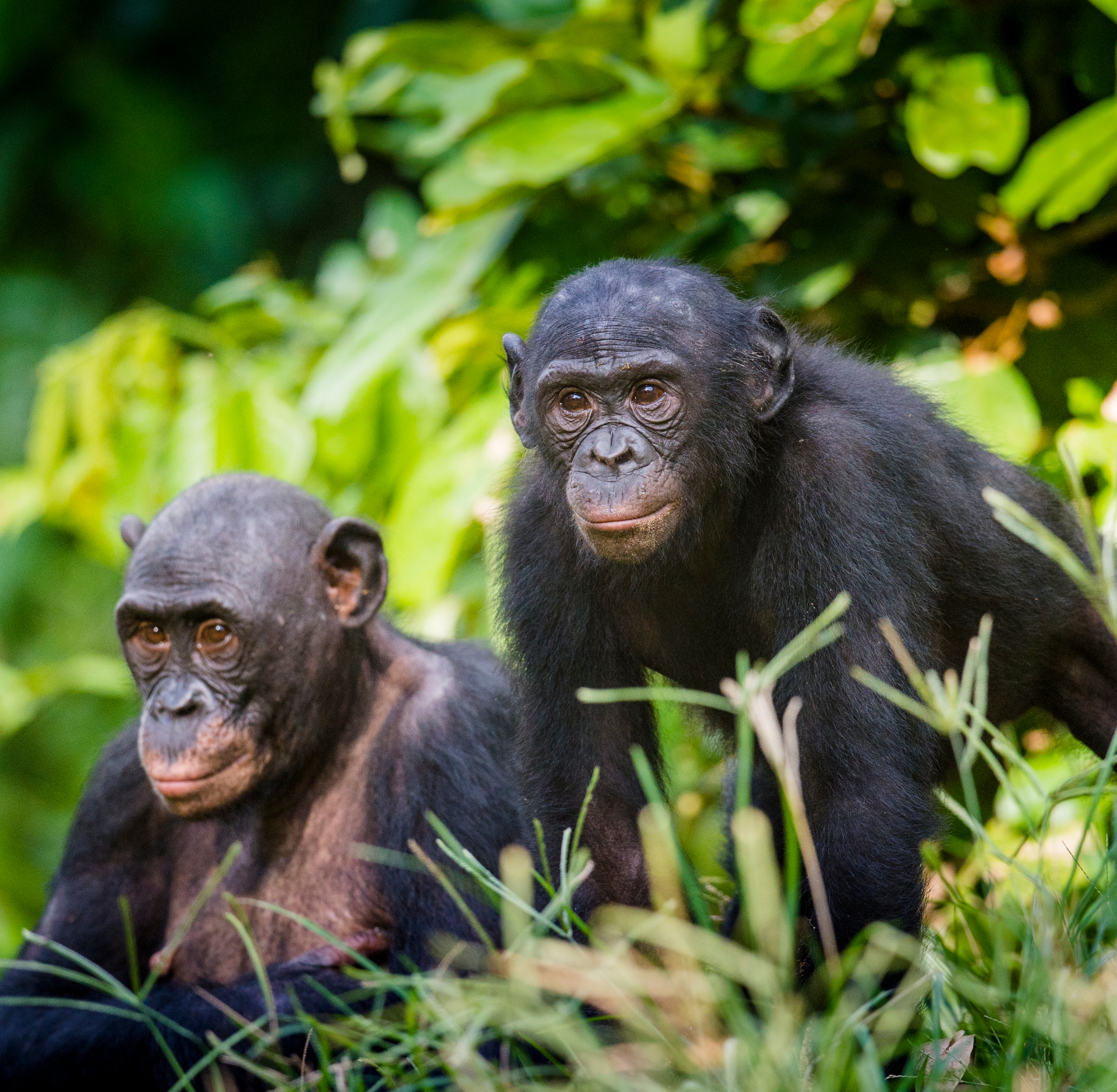 They live in fission-fusion societies of up to 150 individuals, splitting into small groups when they travel or feed during the day and meeting to sleep at night. There is a distinct linear dominance hierarchy among male chimpanzees, with males dominating females. They are generally fruit and plant-eaters, but they also eat insects, eggs, and meat. Chimpanzees use tools to access food. Chimpanzees groom every day, and this activity has important social functions, such as calming individuals and strengthening their bonds with each other.

The bonobo (Pan paniscus) is the second species of chimpanzee. They are only found in the Democratic Republic of Congo. They live in fission-fusion societies of up to 100 individuals, which usually divide into small groups when they search for food during the day and gather to sleep at night. The generally peaceful, egalitarian and cooperative bonobo society is attributed to the evolution of a very complex social system. Female bonobos are dominant in bonobo society, with women forming close ties with men through same-sex social contacts, which is believed to limit aggression. Fruits make up half of the bonobo's diet, but they also eat vegetation and occasionally supplement their diet with insects, larvae, earthworms, eggs and small mammals. (source : UN-GRASP) 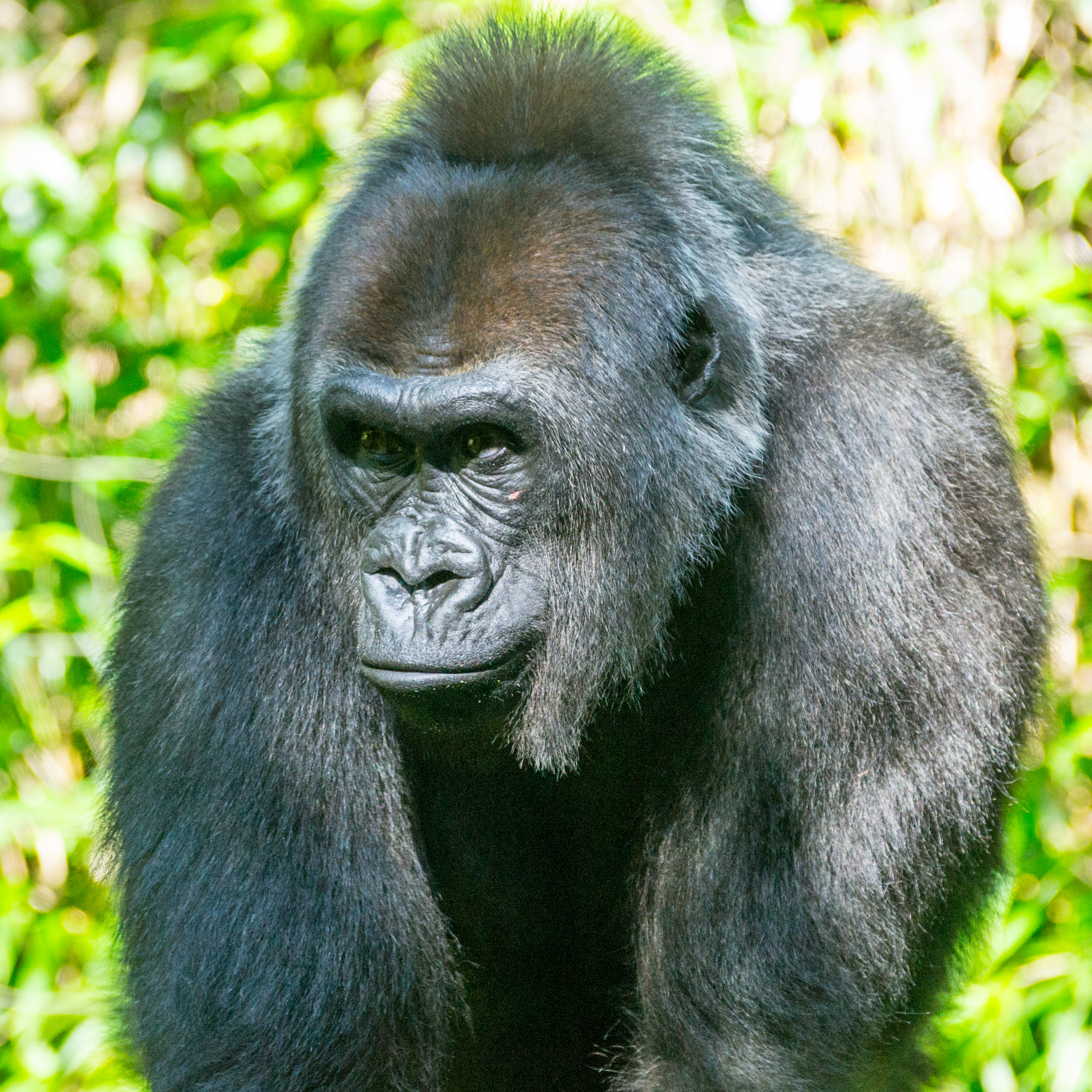 They are among the most powerful and striking animals, not only for their size and strength, but also for their gentle and humane behaviour. Social groups of gorillas usually consist of an adult male or silverback, several adult females and their offspring. Group size is usually 5 to 10 individuals, but can vary from 2 to more than 50 members. The bond that a silverback has with its females is at the heart of the social life of gorillas. Gorillas are mainly plant eaters and spend almost half of the day feeding on stems, bamboo shoots and various fruits, supplemented by bark and invertebrates. (source : UN-GRASP) 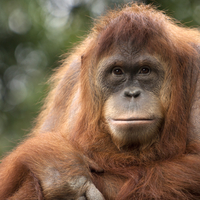 Their name is derived from the Malaysian and Indonesian expression "orang hutan", which means "person of the forest". Orangutans spend most of their time in the trees, and live a more solitary lifestyle than the African great apes. Social bonds are mainly created between mothers and their offspring, who stay together until adolescence. Fruits make up about 60% of the diet of orangutans; other foods include young leaves, shoots, seeds, bark, insects and bird eggs. Orangutans use a variety of sophisticated tools and build sleeping nests each night from branches and foliage.

The Sumatran orangutans (Pongo abelii and Pongo tapanuliensis) are endemic to the island of Sumatra, Indonesia. Once far more widespread on the island, the species is now generally restricted to the north of the island, north of the Batang Toru river on the west coast of North Sumatra province. The Leuser Ecosystem, in the provinces of Aceh and North Sumatra, is considered to contain 91% of the remaining wild population. Whilst this is largely a mountainous area, orangutans exist in greater numbers and at higher densities in the remaining lowlands (regions below 1,000 m).