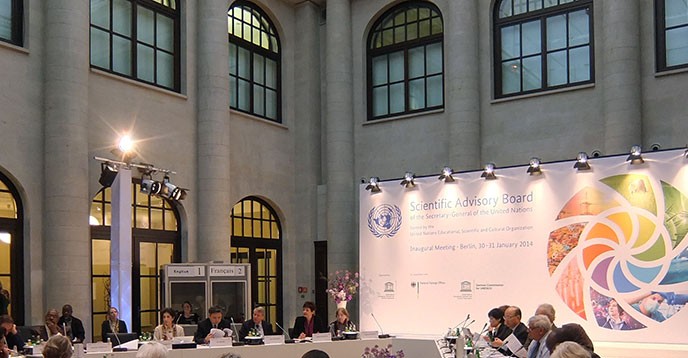 Outcomes of the Inaugural meeting

On 30 and 31 January 2014, the Scientific Advisory Board (SAB) of the UN Secretary-General held its Inaugural meeting in Berlin, upon invitation of the German Government.

The public opening ceremony at the Federal Foreign Office was addressed by Frank-Walter Steinmeier, Minister for Foreign Affairs of Germany, Ban Ki-moon, Secretary-General of the United Nations and Irina Bokova, Director-General of UNESCO. The ceremony was attended by more than 500 persons, eminent German and international policy-makers, scientists and the media, including ambassadors, more than two hundred university rectors and directors of non-university research institutes, as well as Presidents and Secretaries-General of German national scientific institutions. The moderator of the ceremony was the well-known German TV science journalist Ranga Yogeshwar. Musical interludes were contributed by the World Orchestra for Peace.

In his welcome remarks, Federal Minister Steinmeier underlined his Government’s strong commitment to the United Nations and emphasized the need for a more effective multilateral cooperation, reminding the audience that “the United Nations was created precisely to bring solutions to issues where Nations have been confronted with their own limits, where everything else has failed -- And this is particularly relevant for sustainable development.”

In his Introductory remarks, the UN Secretary-General emphasized that “We need a clear commitment to put the world on a sustainable path […] We must pull our resources and wisdom together: we need more integrated policies to tackle the interconnected challenges we all face.” The Secretary-General indicated three short-term landmarks for the SAB: the UN Climate Summit in September 2014, the last mile for reaching the MDGs by 2015 and the post-2015 development agenda.

UNESCO Director-General Irina Bokova called for concrete answers and scenarios from the scientific community on how to bring the diversity of knowledge together to advance effective action: “This Scientific Advisory Board is, fundamentally, about action”, she said.

Six young scientists from Egypt, Sri Lanka, Indonesia, Slovenia, Canada and Brazil, presented a jointly crafted statement that was well received by the audience and the members of the SAB. They encouraged “the SAB specifically to consider mechanisms to support reflexive and inclusive public science… Public science and the democratization of knowledge are based on the conviction that human development must have priority over profit-orientation.” They also encouraged the SAB “to foster outreach, engagement and transparency in its activities”, as well as “to make use of growing networks of young scientists, including Young Academies”.

The opening ceremony offered the opportunity to the twenty four out of the twenty six SAB members present in Berlin to express their vision for the SAB and to comment on the need to strengthen the science-policy interface and to better integrate all sciences, as the precondition for sustainability.

The 21st century needs the full range of knowledge, and indigenous knowledge has a vital role to play here, said Professor Joji Carino (Philippines). Underlining the importance of social sciences, Professor Sir Hilary Beckles, from Barbados, declared: History is like the rain forest, if we look carefully enough, we will find solutions to many problems and issues we have already been confronted with.

Nobel Prize Laureate Ada Yonath (Israel) underlined the international dimension of science as a powerful way to bring people and ideas together: Science is more than a tool, it is also the way to gain new wisdom, new ideas and design new politics, on a global level, because science is international.

The way to be effective is not only to get good science but to communicate effectively about it, said Professor Rajendra Kumar Pachauri, Chairman of the Intergovernmental Panel on Climate Change (IPCC).

In four subsequent internal working sessions, chaired by the Director-General of UNESCO, the members of the SAB defined the elements of their future work programme. The Board agreed that, in the initial 6-months phase, its work will be structured around the following four work streams: (1) Science and multi-disciplinary approaches needed for sustainable development; (2) Linkages between science and society and mobilization of all stakeholders for sustainable development; (3) New approaches, modalities and processes to integrate better science into policy-making; (4) The relevance of science for Sustainable Development Goals (SDGs).

Cross-cutting topics such as capacity-building and human capital development, existing gaps in science and research will also be tackled. In addition, the Board recognized the need to articulate a science-based “meta-narrative” to: (i) better communicate the underlying causes of global crises; (ii) focus on growing inequalities and social exclusion; (iii) underline the importance of job opportunities for all; and (iv) identify the need for decisions in light of uncertainty.

Each work stream will elaborate a policy brief to be presented to the UN Secretary-General before the UN Climate Summit to be held in September 2014.

The Scientific Advisory Board is part of the global strategy of the United Nations to mobilize the sciences to achieve the UN Millennium Development Goals and to ensure the integration of scientific perspectives into the post-2015 global sustainable development agenda.

Report of the Inaugural Meeting