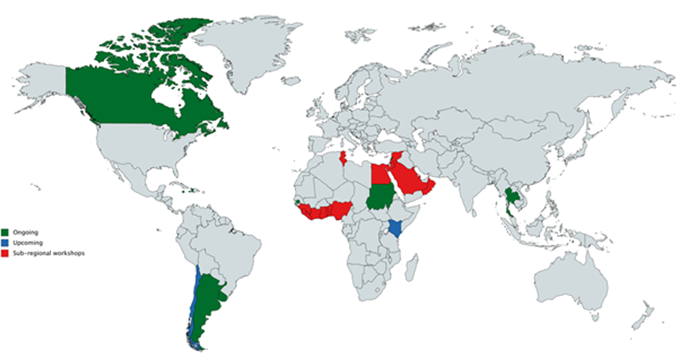 Nine national and two sub-regional workshops have been conducted involving 26 Member States. Nine countries from Africa (Benin, Côte d’Ivoire, Gambia, Ghana, Guinea, Liberia, Nigeria, Sierra Leone, and Togo), eleven Arab States (Egypt, Jordan, Kuwait, Lebanon, Oman, Palestine, Qatar, Saudi Arabia, Sudan, Syria and Tunisia), one country from Asia and the Pacific (Thailand), two in Latin America (Argentina and Uruguay), two in the Caribbean (Haiti and Jamaica) and one from Europe and North America (the province of Quebec in Canada). There is currently a high demand for the implementation of the SAGA project. For instance, Chile and Kenya, have requested to implement the project at a national level and are even self-financing the whole implementation. There are upcoming training workshops in New Delhi and Sri Lanka to discuss the implementation of the project, a sub- regional workshop in Namibia and capacity-building workshops in Panama for eight Central American countries.

Participation of the SAGA project in conferences

The SAGA project has been presented in many conferences around the world, in order to introduce its innovative methodology and tools, communicate its progress and results, as well as to raise awareness among countries on the importance of reducing the gender gap in STEM.

Conferences of note include: