Let’s Do It Foundation (Estonia) 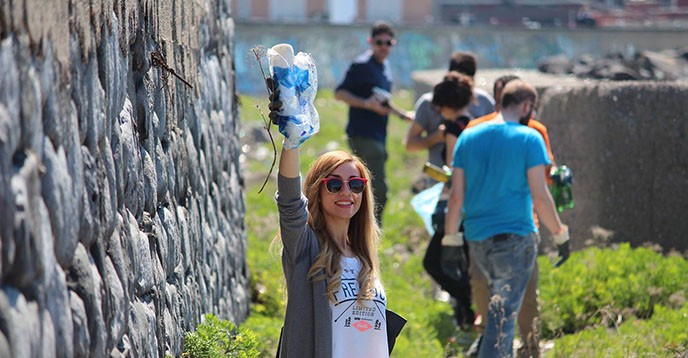 © Let's Do It Foundation

The Let’s Do It Foundation is a public benefit organization which coordinates the international movement 'Let's Do It! World'. It works by mobilizing millions of positive-minded, action-oriented people to tackle environmental and social problems related to mismanaged solid waste. Based on its three core principles of Cooperation, Positivity and Ambition to action, it aims to eradicate 'trash blindness' and provides innovative technological solutions to deal with waste issues. The Foundation is also very active in organizing projects that focus on social inclusion, democracy and the environment.

Let’s Do It receives the Prize for its projects 'World Cleanup Day' and 'Keep It Clean'.

These grassroots initiatives address the global problem of mismanaged waste and stimulate social and environmental change. World Cleanup Day’s aim is to: inspire volunteerism in local communities around the world; develop and empower the network of leaders; and empower countries, particularly developing ones, to deal resiliently with litter now and in the future.

National and regional leaders – 'cleanup advocates' – build local networks to run nationwide cleanups in which anyone can participate. A mobile app maps waste around the world, using crowd-sourced data and new technological platforms to highlight the nature and scale of the issues. The project supports individual initiatives which educate on efficient waste management and sustainable lifestyles.

Initially started as a national scheme in Estonia, World Cleanup Day has evolved in only 10 years to become a worldwide movement with around 20 million volunteers in 150 countries. World Cleanup Day 2018, organized on 15 September, launched a global 'green wave' – beginning in New Zealand and travelling around the world, with volunteers taking action in their countries as the day evolved through different  time zones, ending in Hawaii.

Keep It Clean is a follow-up project that brings together organizations, experts and visionaries around the world to help communities develop long-term waste management plans. The ultimate aim is to entirely eliminate litter and waste.

Recommendation by the International Jury of the Prize:

"This project exemplifies ‘learning by doing’ on a grand scale. Initiated as national scheme in Estonia, it now involves 20 million volunteers in 113 countries. Given the world-wide urgency of sustainability issues, and particularly the scourge of waste, this unique project ably combines a range of factors – individual and societal scales of responsibility; local and national levels of action and impact; awareness and long-term attitudinal change –towards a low-waste/no waste environment and the manifestation of the circular economy. An innovative methodology including crowd-sourcing, individual commitment, and the use of technology, demonstrates the potential for large-scale social change through applied ESD and positive action. This project could well inspire parallel transformative initiatives on other sustainability issues, tapping the goodwill and creativity of populations to engender a better world in the context of the SDGs."

Learn more about the project: