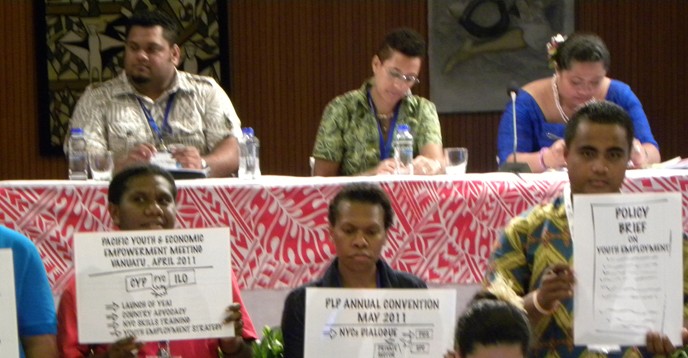 The pre-conference programme of the Third International Conference on Small Island Developing States (SIDS) was launched on Wednesday evening with the first pre-conference activity: SIDS TALAVOU (Towards a Legacy of Achievement, Versatility, Opportunity through partnership and Unity) for Sustainable Development.

The Government of Samoa acknowledged the important role of young people in the SIDS process, and more importantly in the future of sustainable development in their countries and in the SIDS regions. The delegates received a warm welcome to Samoa and to the Conference from the Prime Minister of Samoa, the Hon Tuilaepa Aiono Sailele Malielegaoi, and the Secretary-General of the Conference , Under Secretary-General Mr Wu Hong-bo.

On Thursday 245 young people from across the world met to consider how young people can contribute to the next Small Islands agenda. Colourful puletasis from the Pacific, elaborate braded hair styles from the Caribbean, the reverberations of Creole from the AIMS region, and international flavour from youth representing countries as diverse as New Zealand to Spain. Delegates came from a range of youth-led organisations, national youth councils, from national and regional NGOs working on disability, environmental issues, health and climate change, from schools and from local community youth groups.

With leadership from the Major Group for Children and Youth, and building on the inputs made by young people during the SIDS Preparatory Process in Kingston, Nadi, Victoria, the Inter-regional Meeting in Barbados and global online discussions, five thematic areas were discussed in detail as well as regional priorities for the three SIDS sub-regions.

Projects developed and led by youth from the three sub-regions were featured in “showcase segments”. Allian Olliviere from Barbados told of local efforts to take action on gender equality in response to the International Day of the Girl Child. Reesha Shareef presented the youth-led DYM project that has reached over 2,000 young people in the Maldives to raise awareness on environmental issues; an initiative without support from Government or donors. In the Pacific the power of messaging was demonstrated by members of the Pacific Youth Council who presented their segment on the Youth Employment Advocacy Initiative (YEA!) verbally, in signs and by video.

Though data gaps remain, issues facing SIDS and young people in the SIDS countries are generally well known. How to respond to these issues was discussed in four thematic sessions: health; education, employment and entrepreneurship; climate change and biodiversity; and water and sustainable energy.

Whilst the drafting group worked on collating and structuring the outcomes document, a fun challenge based on the four thematic areas was given to the floor – create a message on each of the four themes. Narrowly beating the climate change group's song, the health group danced, chanted and role played the way to a healthier lifestyle. The whole floor joined in the watermelon, papaya, banana chant (to the tune of Frere Jacques) with the winners carrying off some bags of goodies.

The first theme in the TALAVOU Youth Statement, governance and youth participation, very strongly articulates this vision for a durable partnership between youth, governments and the United Nations. Sections on health, and education, employment and entrepreneurship, strongly bring out the message that the SIDS agenda is not just about the environment, but must be hand-in-hand with a social development agenda. Environmental themes of climate change, disaster risk reduction and biodiversity, and water and sanitation emphasis the vulnerability of islands, and science and technology for the development of solutions to the challenges facing SIDS.

The Conference ended with agreement on six common global priority areas to be complemented by specific regional recommendations from the three regions. The process for finalising the youth outcome statement will move forward over the next two days through an interactive process both online and through hard copies.