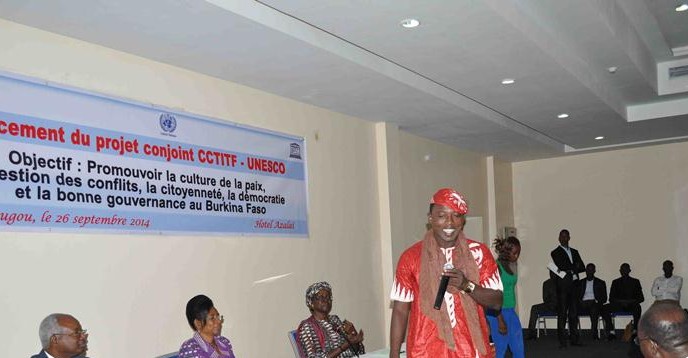 Youth are specifically targeted in a new initiative to promote inter-faith and inter-ethnic dialogue and cultural understanding in Burkina Faso. The aim is to combat radicalization, extremism and terrorism and invite young people to greater participation in society. UNESCO will make use of its Reference Manual for peace education and its close ties with community radios in Burkina Faso


The UN Counter-Terrorism Implementation Task Force and UNESCO’s Regional Office in Dakar have joined forces to run the $285.000 project, which was launched  on 25 September 2014 in the capital Ouagadougou by the Minister of Education Hon. Koumba Bolly.

The launch was attended by the Director of UNESCO's Regional Office in Dakar, as well as the Minister of Security, the Minister of Human Rights, several high ranking government officials, religious and traditional leaders, the UN Resident Coordinator, governors, mayors, journalists and relevant civil society actors.

"Peace education and social inclusion of vulnerable communities are prerequisites for sustainable development," said Ann Therese Ndong-Jatta in her speech at the launch of the project. "They are essential conditions to stem the rise of terrorism and extremism in Burkina Faso in particular and in the region of West Africa in general," she added.

Ms Ndong-Jatta pointed out that "to build peace, we must open our eyes to the reality of the hidden crisis of education during conflict, when schools have become targets of fighting, or that education becomes a means of indoctrinating or sow hatred."

The 9-month project will specifically target youth in the capital Ouagadougou and the northern part of the country, where tensions are high due to the influx of Malian refugees.

UNESCO's support will include the use of educational tools, online as well as offline, to promote education in human rights, citizenship, democracy and regional integration. These tools have been developed within a major Peace for Development project which has targeted the 15 countries of the Economic Community of African States (ECOWAS). Reference tools, guides and specific manuals were produced in main national languages and capacity building workshops were held for teachers and educators.

UNESCO will also mobilize the media and make use of community radios to inform, educate and mobilize communities around the culture of peace, conflict management, citizenship, democracy and good governance.

"Community broadcasting plays a vital role in the daily life of local communities and UNESCO helps these radios to create their own programmes and to organize debates on issues that affect them and in a language that listeners can understand," Mrs Ndong-Jatte explained.

The launch was followed by an initial consultation with the relevant actors to solicit their input in the discussion of the road map.

The concept of "Culture of Peace" was born in Africa, because it was developed for the first time on a global scale by UNESCO at the International Congress on Peace in the Minds of Men, held in Yamoussoukro, Côte d'Ivoire in 1989. An event to celebrate the 25th anniversary of the concept took place from 21-23 September 2014 in the very same location.

The United Nations' global counter-terrorism strategy was adopted in 2006. It is a global instrument that will improve the counter terrorism at national, regional and international levels. This is the first time that member states agree on a common strategic approach to fight terrorism. A wide range initiatives are taken place to strengthen national capacity to fight against terrorist threats and to better coordination of anti terrorist activities of the UN system.