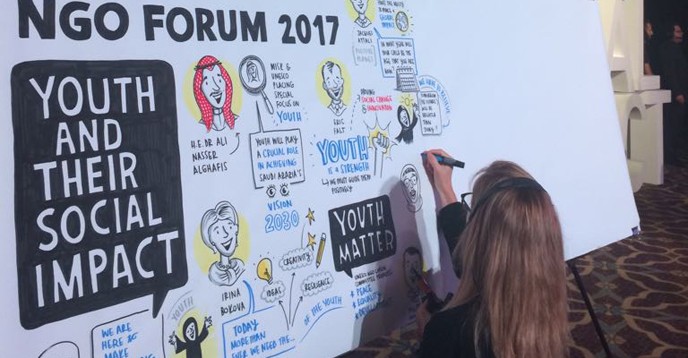 “Transforming”, “motivational” and “enlightening” were the words used to describe the Seventh International Forum of NGOs organized in partnership with UNESCO and hosted by the MiSK Foundation in Riyadh, Saudi Arabia, on 3 and 4 May. The event brought together a record 2,000 participants from UNESCO’s NGO partners and young women and men from 70 different countries who exchanged views on the theme Youth and their Social Impact, a subject at the heart of UNESCO’s mandate and a priority for the Organization.

The meeting, UNESCO’s seventh NGO Forum, was the first to take place in the Arab region. It was also Saudi Arabia’s largest NGO conference ever, thanks to the joined efforts of the NGO-UNESCO Liaison Committee, UNESCO’s Secretariat and the MiSK Foundation.

“There are countless initiatives led by youth, all giving shape to a new humanism, to new forms of citizenship for peace and respect for human dignity. This forum was a privileged moment of exchange and reflection on the challenges facing youth today”, said Irina Bokova, Director-General of UNESCO, in her closing speech at the Forum. “I am inspired because I see here a lot of energy, many ideas and strong leadership. And strong leadership is what helps us move forward,” she added.

Tackling issues such as digital illiteracy, youth unemployment, the destruction of cultural heritage, climate change and especially the crucial role of youth in shaping policies and creating jobs, the Forum called on NGOs, governments and the private sector to scale up young people’s initiatives locally, nationally and internationally, to integrate young people at all levels of the public and private sectors and accompany them in developing the competences they need to maximize their active citizenship and social impact, particularly through non-formal and informal learning.

Young change-makers from UNESCO’s NGO partners and UNESCO Youth Networks, many of whom have overcome obstacles such as disability, inequality, war, and bereavement, shared their stories and spoke of their commitment to projects that positively impact the world around them.

The International NGO Forums are designed as platforms for NGOs with official partnership agreements with UNESCO to share their experiences and best practices, discuss ways in which they can help address critical global issues and support UNESCO’s action.

Previous editions have been held in Beijing (China), Paris (France), Querétaro (Mexico), Sozopol (Bulgaria) and Yamoussoukro (Côte d’Ivoire). They were dedicated to themes such as peacebuilding, access to water, women and poverty, rapprochement of cultures or the role of youth in safeguarding cultural heritage. They have been behind the creation of several grassroots initiatives that contribute to the achievement of UNESCO’s objectives.