Youth empowerment, civic engagement and media literacy at the core of the agreement signed between UNESCO and the UN Alliance of Civilizations in New York 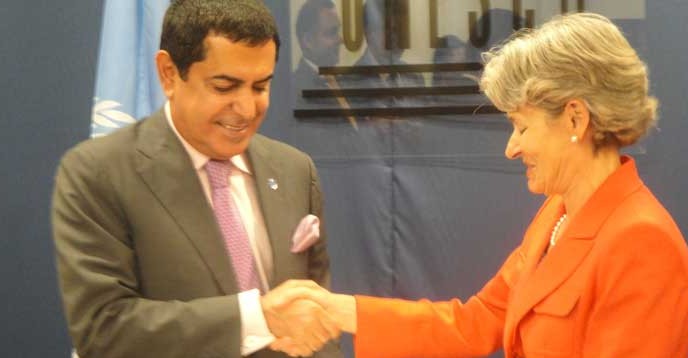 
Through this agreement, UNESCO and the AOC reaffirm their commitment to pursue joint efforts with a view to improving relations between peoples of different cultures, religions and traditions, so as to counter contemporary tendencies towards extremism and fanaticism, to promote mutual understanding and respect, with a view also to bridging divides amongst peoples.

The new agreement sets the goals the two partners expect to achieve, focusing specifically on youth and the media. It delineates an enhanced cooperation through the development and implementation of joint initiatives and programmes, also taking advantage of frameworks such as the International Decade for the Rapprochement of Cultures (2013-2022), which was proclaimed last December by the UN General Assembly with UNESCO as lead agency.

Mr Al Nasser affirmed that the agreement formalizes the AOC's excellent cooperation with UNESCO, and stands to be "a partnership to complement each other in serving the international community." The Director-General underscored the heightened importance of the AOC in the current political context, when it is more vital than ever to promote diversity, dialogue among cultures and tolerance. "We have a responsibility in today's world to educate, to teach, to reconcile and to pass a strong message on our shared humanity. Together we can make a difference."