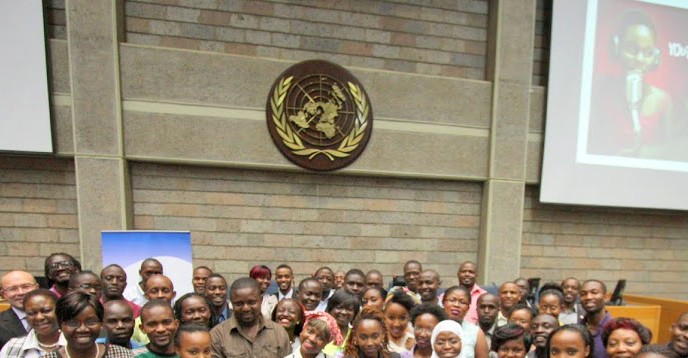 
The celebrations brought together 55 participants working in community radios, university radio stations, youth organizations, media organizations, and the United Nations staff.  The 2-day event aimed at increasing the level of participation of young people in radio taking into account media ethics as producers of radio contents with media literacy skills and mobilizing and encouraging main stream media and community radios to promote access to information, freedom of expression and youth empowerment through their programs.

During the opening of the celebrations, Nasser Ega-Musa, Director of United Nations Information Centre said that “I am delighted that this year’s World Radio Day 2015 celebrations focuses on youth and media. It’s important to note that the youth are critical constituent in our society and therefore we should never ignore them. It’s my sincere belief that this year’s celebrations will amplify youth voices and increase their level of participation in radio and other forms of media in Kenya and the world.”

At the official celebrations youth participants presented their 5-7 minutes pre-recorded radio programmes from their stations on issues affecting young people in their geographical areas of coverage. The programmes included themes such as: Stigmatization – The Dilemma faced by young mothers in Kenya; Youth and Drugs; Youth empowerment; Youth and Democracy and Clutches of extremism among others. The programmes were produced in English and Swahili.

A plenary discussion was held after the presentations where participants engaged with a panel comprising of representatives from UNESCO, Media Council of Kenya, UN Information Centre for Kenya and Kenya National Commission for UNESCO - on issues relating to youth perspectives of media in Kenya.  Salome Ayugi, a fourth year journalism student at Maseno University said that “I am happy to have been invited to the World Radio Day 2015 celebrations. It provided me with an opportunity to share my experience and challenges of working as a producer and reporter at my university’s radio station in Kisumu County.”

Nyondo Nyae Kengo, a Producer and Reporter at Kwale Ranet FM stated “I wish to thank UNESCO for inviting me to attend the training workshop on code of ethics and media literacy; and, the World Radio Day celebrations. It’s now my duty as a journalist to go apply the knowledge that I have gained at my radio station in Kwale County“.

The World Radio Day 2015 celebrations focused on young women and men with a call for greater social inclusion of the generation under 30 years old, which accounts for more than half of the world’s population, and underlines the power of radio to contribute to this objective. It advocated for inclusion of young people in conceiving and producing radio programmes; production of radio programmes; and, production of programmes by and for young people.  This activity was organised as part of UNESCO’s on-going SIDA funded project titled: “Empowering local Radios with ICTs” in Kenya.