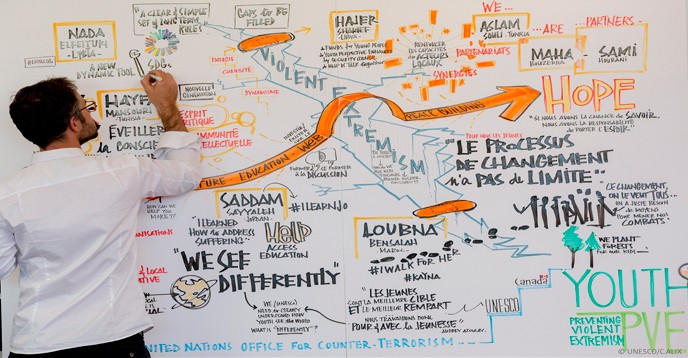 A new two-year project on “Prevention of Violent Extremism through Youth Empowerment in Jordan, Libya, Morocco and Tunisia” was launched by young leaders, UNESCO and the United Nations Counter-Terrorism Centre (UNCCT), at UNESCO Headquarters in Paris, on 24 April 2018.

The new project will support youth driven initiatives on the ground in education, sciences, culture, and the media to prevent violent extremism. Youth organizations, education stakeholders and media professionals will be mobilized around programmes that will include cross-cultural youth dialogues, training in conflict-sensitive reporting, and critical thinking labs.

The launch event, moderated by Nada Al-Nashif, UNESCO Assistant Director-General for Social and Human Sciences, featured the participation of several young people from the region affected by violent extremism, and initiators of concrete and hopeful projects. It was the occasion to witness their stories: 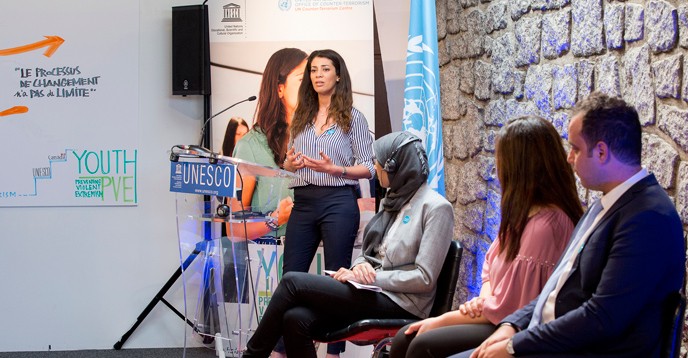 "It is through young people that we empower young people. We want to be like our peers rather than like our fathers," explained Loubna. According to Hayfa “any strategy to prevent violent extremism must put young people first, not because they are the main targets for radicalization, but because young people are the most capable of circulating a message among themselves and finding solutions to the problems they face. Youth are the most ambitious in society, which means that, to them, the process of change and progress has no limits.”

UNESCO Director-General, Audrey Azoulay, and Under-Secretary-General of the United Nations Office of Counter-Terrorism, Vladimir Voronkov, also had a public conversation on the UN and UNESCO’s response to violent extremism with two young actors of change from the Arab region, Hajer Sharief (Libya) and Aslam Souli (Tunisia). “Today, 46 per cent of the world’s population is twenty-four-years-old or younger. Africa and the Middle East, in particular, have the highest proportions of young people. They are a positive asset and source of leadership – they themselves represent hope and promise, and they are leaders today,” said Vladimir Voronkov. Audrey Azoulay added “At UNESCO we work for but especially with youth. I believe that you, youth, are the vector and the message in itself”.

Maha Bouzerda, young cultural project manager from Morocco, and Sami Hourani, young social entrepreneur from Jordan, concluded the event. “Innovation through this youth empowerment project resides in its opportunity-based approach that engages youth and integrate them through offering them comprehensive, multi-dimensional empowerment. From today on, youth in Jordan, Tunisia, Morocco and Libya and the world, get ready to break the vicious cycle of extremism, challenge yourself, get involved, be prepared to and equip yourself and architect a violence-free world, full of peace and hope, ” according to Sami.

“Today young people are able to revolutionize the world in a negative or a positive way. It is the responsibility of international organizations to support young people so that this revolution takes a positive direction,” Maha concluded.

The one-hour event gathered 150 participants, including permanent delegations of Canada, Jordan, Libya, Morocco, Tunisia and other delegations, the Project’s partners including civil society organizations, UNESCO Chairs, experts,  and research institutes, and colleagues from UNESCO. During the event, participants were also invited to walk through the photo exhibition “A new Generation of young urban artists”, by Emeric Fohlen, and to listen to the pop/soul music band, Bénarès.