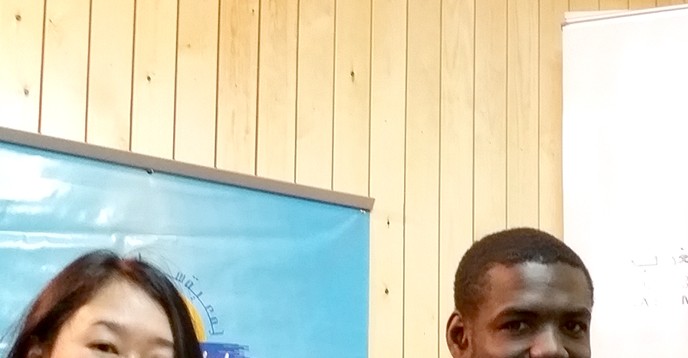 On 13 February, Morocco celebrates youth on the occasion of World Radio Day. With the support of the UNESCO Office in Rabat and its partners E-Joussour, Hit Radio and Atlantic Radio, in the framework of the NET-MED Youth project financed by the European Union, Moroccan youth are invited to make their voices heard through the waves. Sneak Peek below.

Experts will speak “in the words of youth” to large audiences through radio, broadcasts made by youth and for youth, celebration spots ... This year the radio goes through a big makeover!

Hit Radio, a partner for the event, will broadcast celebration spots throughout the Day, inviting young people to talk about their ideals, their analyses, their realities and the link between them and this media. Vox pops that Louaï Hafa, radio journalist and advocate at e-Joussour went collecting with his audio recorder.

The Moroccan media landscape is not staying behind. Atlantic Radio, a major partner, will devote seven minutes in prime time to UNESCO, the Day and Moroccan youth. Seven minutes of celebration, analyses and exchanges.

Radio for youth and by youth

E-Joussour took this opportunity to propose an unprecedented initiative in Morocco: two one-hour programs, one in French and one in darija, broadcasted on Internet radio in Morocco and the Maghreb-Mashreq region. During the two hours of programming, a presenter, a commentator, young guests engaged in the NET MED Youth project in Morocco, the analysis of UNESCO, will come together to reflect, discuss and share impressions of youth. The themes: youth´s freedom of expression on the radio, youth´s representation and new possible forms of expression… Find the programme on e-Joussour.

Among these new forms of expression, Marwan Elaarj has created and given value to one: the J20Café. Organized by J20.MA, in partnership with the HIBA Foundation and in collaboration with UNESCO, J20Café is a debate forum that aims to facilitate a space for interaction with the public. The objective of J20Café is to address various current socio-cultural issues related to youth in Morocco. On the occasion of World Radio Day, J20Café chose, for its 5th edition, to open a debate on radio, youth and freedom of expression in the framework of UNESCO’s NET-MED YOUTH project. Thus, the questions that arise are:

So many questions that will find answers! For this purpose, come to the Renaissance Theater on 13 February, 360 Avenue Mohammed V, 10000 Rabat, Morocco, or join the event's page on Facebook.

Fostering Freedom of Expression, Press Freedom on All Platforms, Media Development and the IPDC, Media Pluralism and Diversity