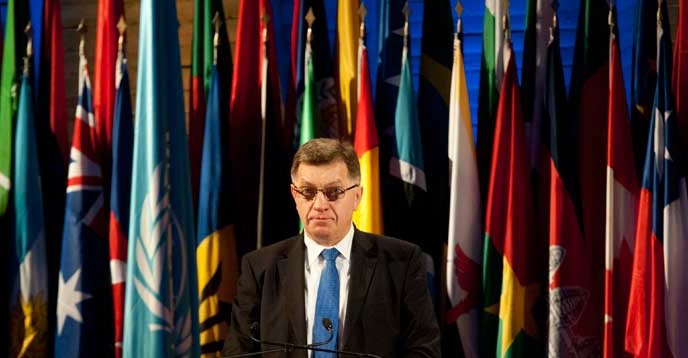 The 37th session of UNESCO’s General Conference, which brings together all of the Organization’s Member States, on Wednesday hosted a new edition of the Leaders’ Forum on the theme “UNESCO mobilizing for and contributing to the post-2015 agenda through education, the sciences, culture and communication and information”.


The purpose of the Forum was to reenergize the international community’s commitment to promote concrete development goals, as we approach the 2015 deadline for the Millennium Development Goals (MDGs) adopted in 2000.

“At stake in this debate,” said UNESCO Director-General Irina Bokova, “the key to success, is to identify factors of sustainability, so that our efforts are sustainable. The answer lies in the Constitution of UNESCO: lasting peace and development must be anchored on a basis more solid than political and economic arrangements, they must be grounded in human dignity and rule of law, reinforced by freedom of expression and access to information.”

The event featured keynote addresses by the President of Costa Rica, Laura Chinchilla; the President of Tunisia, Moncef Marzouki, and the Prime Minister of Lithuania, Algirdas Butkevicius as well as ministers from 54 countries who contributed to a lively debate moderated by Shashi Tharoor, India’s Minister of State for Human Resource Development, and Stephen Cole, senior Al Jazeera Television presenter.

The President of Costa Rica pleaded for a new social contract to address ethical challenges, including a “natural contract,” to ensure that people stopped plundering nature but became its custodians. Ms Chinchilla, as many other speakers, warned that it was urgent to achieve harmonious relations with nature and among people. This is the essence of sustainable development, which must engage new actions to combat climate change, loss of biodiversity and degradation of the oceans.

Education must remain a key objective in the next agenda, said the President of Tunisia, who called for educational systems that foster creativity and critical thinking as well as vocational training, digital skills and openness to other cultures. We must increase the work to eliminate illiteracy but it is imperative to bear in mind that education is a preparation to life in society. Mr Marzouki, said that a balance has to be found between the need to prepare people, especially the young, for employment and the requirements of full citizenship in a world that is increasingly complex and diverse.

The Prime Minister of the Republic of Lithuania, Algirdas Butkevicius, for his part, stressed that UNESCO was directly or indirectly concerned by all the Millennium Development Goals and insisted that the post-2015 agenda must provide for synergies between science, policy and society. He also emphasized the role of culture in achieving these synergies.

Throughout the day, ministers from all parts of the world shared their views on how to attain lasting peace and sustainable development in an uncertain world whose challenges transcend national borders. All agreed on the need to follow the trail set by the MDGs but there was widespread consensus about the need to recognize the central role of culture in the next set of development goals. They also voiced strong support for the UNESCO-led Education For All (EFA) drive, emphasizing the need for quality education, not just access to school.

Although the MDGs helped achieve considerable progress in the fight against poverty, disease, ignorance and inequality, all agreed that much remains to be done as many millions of women and men, girls and boys remain trapped in inhuman conditions.

Speakers agreed that they face a collective responsibility to invent new approaches to address the needs of people living in poverty or on the fringes of society. One lesson drawn from efforts to implement the MDGs is that sustainable and equitable development cannot rest solely on economic policies. It calls for approaches that focus on people and enable individuals and communities to acquire the tools that they need to develop their own potential.

Many speakers echoed the words of the Director-General of UNESCO, saying that sustainable development can only be achieved if it is embedded in the cultural experience of people. Culture is a source of identity, prosperity and social harmony. UNESCO needs to promote the positive forces of culture and prevent it from being politicized to pit people and nations against one another; spread conflict and terror.

Creating synergies and new connections was a recurring theme in the discussion which highlighted the need to build bridges between development and culture, education and democracy, employment and creativity, sustainability and shared knowledge. What emerged of the Forum is a vision that tackles poverty and exclusion through actions that foster dignity and equality for all, notably women, youth and minorities. The major points and suggestions made at the Leaders' Forum will impact further debates at the General Conference and beyond, to inform the work of governments and intergovernmental organizations on the post 2015 global development agenda.

Photo Gallery of the 37th session of UNESCO General Conference