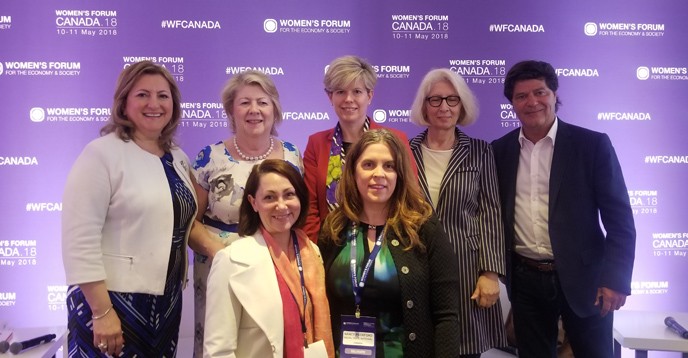 The Women’s Forum for the Economy & Society took place in Toronto, Canada, from 10 to 11 May, 2018. The Forum is the world’s leading platform featuring women’s voices, views and values on major social and economic issues. This year’s main theme was “Bridging the gap: A call to the G7 for inclusive progress”.

How can gendered perspectives and talent diversity in the field of information security help to bring out solutions? How can G7 countries best prepare women and men for jobs of the future? How will women leaders of the G7 countries influence the debate? 600 leaders from the G7 countries, North America and beyond gathered during the Women’s Forum Canada 2018 to share ideas and reflect on these questions and other issues of the G7’s agenda.

Ms Saniye Gülser Corat, UNESCO’s Director for Gender Equality, participated in the Roundtable entitled “Women in governance: participation, representation and inclusive growth“. Moderated by the Honourable Eleni Bakopanos, P.C. former Deputy Speaker of the Canadian Parliament & Equal Voices National Treasurer, this session highlighted that, despite progress achieved in the past years, women are still under-represented in both government leadership and top corporate positions, making up only 5.2% of CEOs in S&P 500 companies.

When asked what changes UNESCO introduced to foster women’s participation in governance, Ms Saniye Gülser Corat highlighted the fact that UNESCO identified gender equality as one of its two Global Priorities since 2008 and set a target for women in decision-making positions (50-50) by 2015. She noted that, as a result, UNESCO increased women’s participation in decision-making levels from 9% in 2004 to 53% in 2018. This achievement was very well received by an audience of around 100 participants who asked several follow-up questions during the Q&A.