The challenges that the feminization of football and sport face are enormous and strong inequalities persist. On the occasion of the FIFA Women’s World Cup starting on 7 June in France, UNESCO wants to highlight that football can be an effective tool to reduce the gender gap and empower women worldwide. In this context, UNESCO organized an interactive panel on gender equality in football entitled ‘Women and Football: #ChangeTheGame’ at its Headquarters in Paris on 4 June 2019.

“We are living in a time of progress when it comes to gender equality, but there are still strong points of inequality and we have to fight them. We have to do that by starting with principles,” Audrey Azoulay, Director-General of UNESCO, stated at the opening of the event. The DG also mentioned the upcoming establishment by UNESCO, with the support of the Swiss government, of a Global Observatory about Women and sport, in the context of the Kazan Action Plan (KAP).

Moderated by Anne-Laure Bonnet, a French sports journalist, female athletes and experts, from around the world, shared their stories and explained how they became engaged in football. 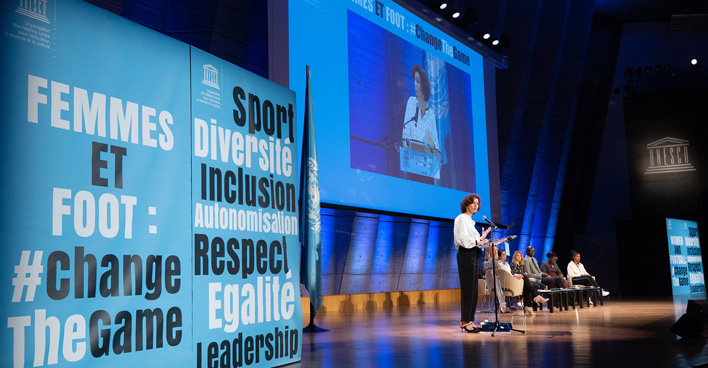 
Nadia Nadim, a professional football player in the Danish National Team and PSG, told the audience how back in Afghanistan, her father taught her how to play football in their hidden garden, where nobody could see her playing football. Her father was killed by the Taliban when she was only a child. Nadia fled to Denmark with her sisters and their mother, away from the war. Close by the refugee camp they lived in, there was a football field, where she saw young girls playing football. This is when she realized that as a girl, she was allowed to football and that she could go far. She encouraged all young girls in the room and beyond to play the game, to become whatever they want to be, and challenged them not to be limited by gender stereotypes. 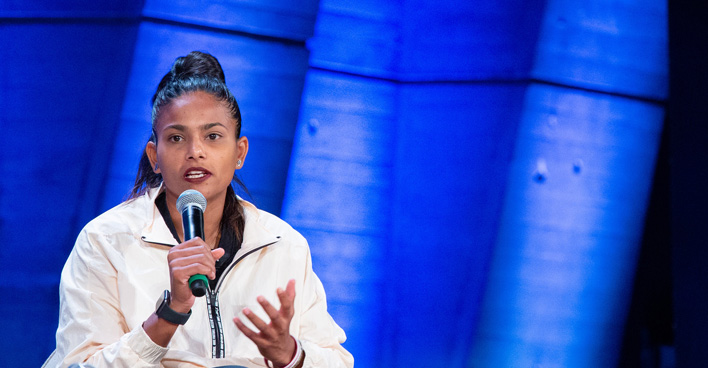 
Houriya Al Taheri, the first female football coach in the Gulf area, spoke about her love for the game. Because playing high-level football was impossible in her country, she chose to become a football coach for women and girls because she wanted and still wants to make a change and empower the next generation. Candice Prévost, a former professional football player, who played in the national team of France, added that the game is never just football, it goes beyond that and reflects women’s situation in our societies. She co-founded Little Miss Soccer, to highlight the social power of football for girls and women.

Anne-Laure Bonnet shared her experiences of being a female journalist in the sports world, where most of the professional journalists are men. She stressed how important it is for young women and girls to see role models in the media and professional sportswomen and men, no matter what sport.

Sylvère-Henry Cissé, president of Sport & Démocratie, joined the conversation by giving voice to the ideas that football is for both women and men and that there need to be more women in football governance.

In the same line, former professional football player Jean-Marc ‘Jimmy’ Adjovi-Boco emphasized the importance of involving men in the discussion of gender equality. “What needs to change, needs to change with and through men. (…) The problems we are dealing with in our societies must also be seen by the perspective of men. We need to understand these problems and we need to make these problems our problems as well. We need to stand with women, in order to make things change”, he said. 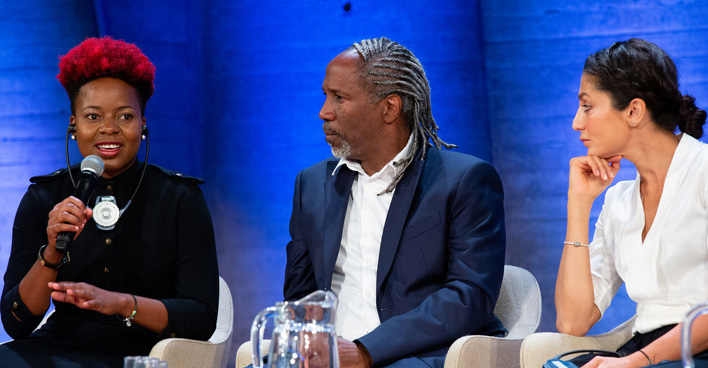 Evelyn Laruni, Country Manager for the Whitaker Peace & Development Initiative (WPDI) in Uganda, explained how important it is to include more women and girls in sports at the grassroots level. “If we don’t encourage and increase girls’ participation and let them play from a young age, it will be challenging to have professionals in 20 years of time.” Football can empower girls in many ways and speaking in the context of WPDI, in a refugee setting, she described how a game such as football allows the host community and the refugees to play the same game together, with no division.

Assistant Manager of the Jamaican National Team, Sherona Forrester, spoke about women and football in the Jamaican context, the importance of youth development through sports and emphasized that change has to happen in response to gender inequalities. “This is a conversation that needs to continue. The change is not automatic. It needs to be strategic and deliberate. When more people come on board with their visions for positive change and do advocacy on sports, we can achieve equal pay and equal play.”

The panel discussion ended with researcher Carole Gomez (IRIS) presenting the just published report of UNESCO, the French Institute for International and Strategic Affairs (IRIS) and the National Union of Professional Footballers (l’Union nationale des footballeurs professionnels – UNFP), entitled ‘Quand le football s’accorde au féminin’ (‘When football rhymes with women’, available in French). The report shows the willingness of these three institutions to change the way women are seen within football and in society.

A mesmerizing performance of the talented Mélody Donchet (France), a four-time champion of freestyle football, closed the event. 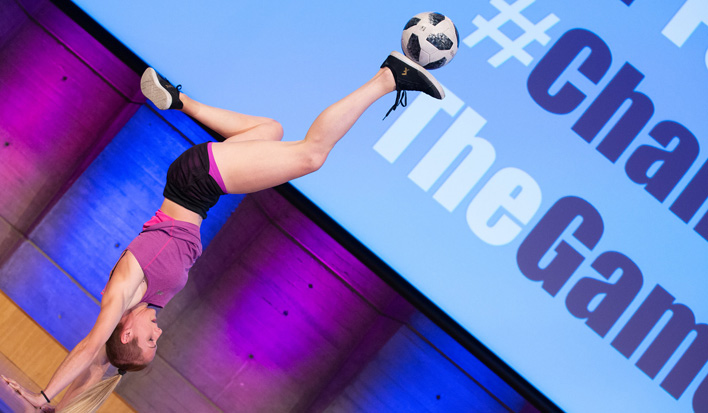