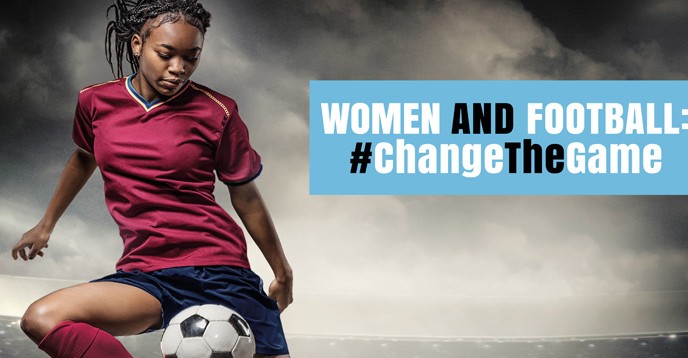 Ahead of the Women's World Cup, to be held in France from 7 June to 7 July, UNESCO is organizing an unprecedented debate, Women and Football: #ChangeTheGame, on 4 June (10:30-12:30) at UNESCO Headquarters. Opened by Audrey Azoulay, Director-General of UNESCO, the event will bring together internationally renowned female footballers and personalities from the world of football.

Nadia Nadim (Denmark), an Afghan refugee with an exceptional sporting background, and Jody Brown (Jamaica), a rising star of international football, accompanied by her Jamaican team, the Reggae Girlz, will talk about the key role that sport can play in promoting diversity and gender equality.

Melodie Donchet (France), four-time world freestyle football champion, will stage a demonstration of her discipline at the event.

Women's football has recently gained greater recognition, as evidenced by the enthusiasm surrounding the forthcoming World Cup. As the United Nations’ agency in charge of physical education and sport, UNESCO, promotes the values of sport and its role in forging more inclusive societies. Supporting women's football can thus serve as a powerful lever for the empowerment of women and girls, making our societies more inclusive. It is within this framework that UNESCO and FIFA signed the Football for Schools partnership in Davos this year.

This event is a fine opportunity to mobilize together with women footballers, be they amateurs or professionals, against discrimination, sexism, harassment, the glass ceiling, and other obstacles women face. It will also help launch a reflection on the values of solidarity and respect in sport, and on actions to be taken for gender equality in the world of sport.

Journalists wishing to attend the event (entrance via 125 avenue de Suffren) are invited to request accreditation from Djibril Kébé: d.kebe@unesco.org, +33(0)145681741