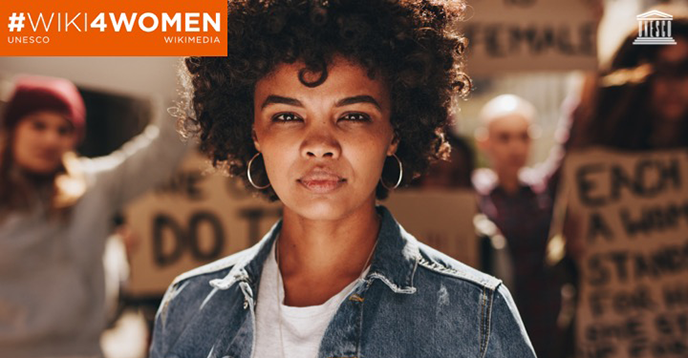 In celebration of International Women’s Day, the UNESCO #wiki4women edit-a-thon invites everyone to take a few minutes of their time on 8 March 2019 to create, enrich or translate Wikipedia profiles of women, in the language of their choice.

The global initiative, led by UNESCO and Wikimedia, is meant to honor those women who have excelled in various fields including education, science, culture, social and human sciences, or communication and information.  Throughout the world, women continue to make significant contributions to society in all domains, yet they remain nearly invisible in the digital sphere.

Despite having achieved extraordinary accomplishments, the stories of these women have gone relatively unnoticed.  Although more than 25,000 Wikipedia profiles are created every day, only a small percentage of total biographies written – approximately 18% - is about women.  However, active participation can reverse this negative trend. Thus, by writing the stories of overlooked women, gender equality can ultimately be achieved.  UNESCO considers gender equality not only a fundamental human right and a building block for social justice, but as an economic necessity.

The #WIKI4WOMEN campaign has continued to generate worldwide interest, and has been made possible with the generous support of Canada, Iceland, Republic of Korea, Fondation CHANEL, ENGIE, The New York Times, France Médias Monde and the Journée de la Femme Digitale. The event will take place in several participating cities such as Bangkok, New Delhi, Almaty, Cairo, Lima, and Buenos Aires. The Paris Headquarters, along with these cities, will host contributors in situ. Participants will include UNESCO staff, members of Permanent Delegations, partners, representatives of civil society, students, the general public, and online contributors, among others.  To commemorate the occasion participants will also receive official event certificates with online registration.