The COVID-19 pandemic has put into high relief the need for independent journalism as well as systemic challenges it faces, said journalists and media experts in a UNESCO webinar yesterday.

The webinar Media Independence in Times of Crisis brought together some 90 participants from around the world for a lively discussion centered around a preview of the forthcoming UNESCO study on Reporting Facts: Free from Fear or Favour.

The event was kicked off by the study’s author, Marius Dragomir, Director of the Center for Media, Data and Society, who identified the greatest challenges to media independence: 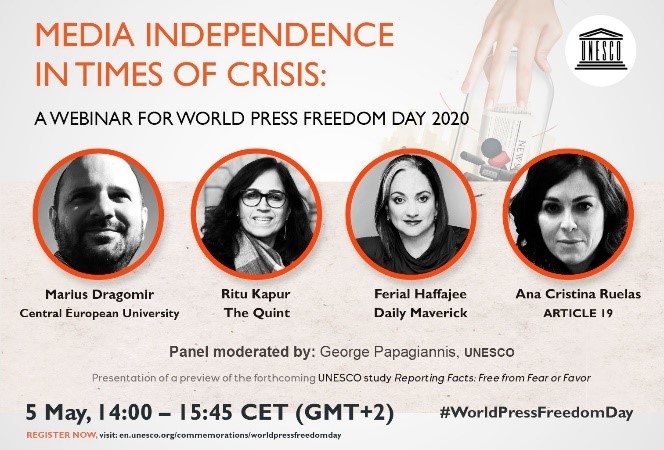 Panelists gave examples from their regions of how media capture has manifested itself, with examples of regulatory control and the dangers of media concentration in the hands of a small few.

Yet in the COVID-19 crisis, Ruela sees new forms of collaboration among journalists that have emerged throughout Latin America, which she said could continue beyond when the public health crisis has passed.

Haffajee, Associate Editor of the South African Daily Maverick, noted the relevance of subscription and membership-based business models, while also signaling the role of independent public broadcasting for reaching rural and marginalized people.

Citing the example of anti-Muslim disinformation about the spread of COVID-19, The Quint CEO Kapur recounted: “When we are doing fact-checking on this content, people are flocking to it.” Digital media would need to further explore such business models, she said.

This decline in revenue comes as a further hit following strains on journalism business models in recent years connected to the rise of Internet companies as a primary distributors of content.

Panelists called on the companies to recognize that they needed to invest in media organizations.

“Independent media is a public good,” said Kapur. “News is a public good. If [the Internet] platforms value news as a public good, they must participate in a fair exchange”, through partnerships such as those that have been established or expanded for fact-checking related to COVID-19.

Haffajee raised concern about “platform capture” of journalism becoming dependent on social media companies, which determine whether users view news content or not.

Concerning donations by these companies to news outlets, she called for this to be channelled by independent boards upholding principles of transparency and accountability.

Reflecting on the future, Haffajee mused that the pandemic may be a “portal”—an “extinction event” for some newspapers and magazines, but where some “high quality journalism survives and thrives”.

The webinar was moderated by UNESCO’s Chief of Media Services, George Papagiannis, and comes as part of a series of virtual events for World Press Freedom Day 2020.

The full study Reporting Facts: Free from Fear or Favour will be released later this year as an In Focus Report in UNESCO’s World Trends in Freedom of Expression and Media Development series.