In many ways, the Beirut blasts of the 4th of August have had a severe traumatic impact on the children of the Lebanese capital. Strongly believing in the power of art to overcome sorrows, “Peace of Art”, a Lebanese NGO, has responded to the emergency with “We Rise Through Art”, a youth-led project supported by UNESCO Beirut as part of its flagship initiative Li Beirut.

Launched in September 2021, the project has brought together young volunteers who have been organizing a series of psychosocial art infused workshops, targeting children in the area of Karantina, near the devastated Beirut port. Initially planned to last 7 months, the project was further extended for 2 months till the end of May 2021, supported by the financial contribution of the “Prayer for Beirut”, a group of Japanese artists who collected donations in Japan for the people of Beirut, in coordination with the National Federation of UNESCO Associations in Japan (NFUAJ).

Through art, music, dance, sports, and drama, the weekend activities combined verbal and physical expression and were organized at a public park and a local indoor space, targeting a group of 40 children and young individual between the ages of 7-16, both males and females, Lebanese and Syrians.

Praising the project, Omar Abbass, a young trainer of art, found that “children were able to have access to arts in a very safe space, meet each other and release the stress after the explosion. They learned to express themselves through colors and create art works individually and collectively. This helped them build a bond with each other too, especially when they talked about their group work."

On her part, Vera Al-Mawla, Director of Peace of Art, revealed that she has concretely witnessed the positive impact of the project on the vulnerable children healing from the traumatic event, improving their self-esteem in a very short amount of time. 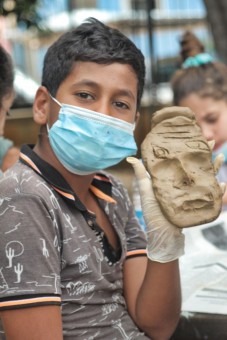 Meet the children of “We Rise Through Art” in this video. Click here.

Li Beirut is an international fundraising appeal launched from Beirut by the Director-General of UNESCO in the aftermath of the explosions, on August 27, 2020, to support the rehabilitation of schools, historic heritage buildings, museums, galleries and the creative industry, all of which suffered significant damage in the deadly explosions.