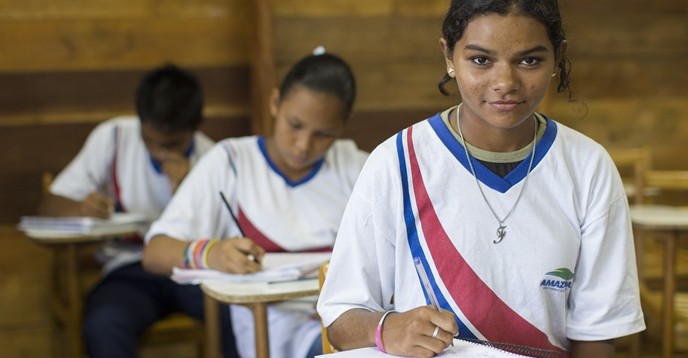 Professor Nina Ranieri, UNESCO Chair on the Right to Education at the University of São Paulo in Brazil talks about the impact of the right to education law in her country.

She spoke to UNESCO as the world marks the 70th anniversary of the Universal Declaration of Human Rights.

The right to access to compulsory education free of charge in Brazil is enshrined in the 1988 Federal Constitution and precise responsibilities are spelled out for federal, state and municipal education systems. It is also described in the constitution as an individual right.

Since then, important progress in people's awareness of their right to education has been made.

“This is one of our achievements," she says. “We know this because of the way the judiciary system is used to enforce this right and the fact that ordinary people know they have recourse to law. In Brazil the Public Prosecutor and Public Defender are playing important roles, acting with force and determination to enlarge the right to education for all,” adds Professor Rainieri.

This is best seen in the area of pre-school and early education.

“Thanks to the correct application of judicial law we have seen an enormous expansion of pre-school education,” she says. “Where there is a gap between laws adopted by the state and the reality on the ground it is the Federal Supreme Court and the constitution that can diminish this. There have been many lawsuits around the theme of education the majority of which have been decided positively to the benefit of young children.”

As an example, a study developed by Professor Ranieiri as part of her work as a UNESCO Chair has shown that lawsuits were essential for the expansion of the right to education in São Paulo.

Making the right to education a reality for all

“We have made enormous progress in the last 20 years. Now the problem is no longer access but quality. In 2015 the country had 50 million students registered in education with 28 million in elementary education,” says Professor Rainieri.

“However, we still have enormous dropout of people from high school. The process of social reforms shows significant progress when compared to previous periods but there is still ample scope for improvement in terms of efficiency and quality.”

“Our biggest problem lies with the quality of teachers and teacher training. The teaching profession is not highly valued. No one wants to teach in the public school system and there are a variety of reasons including security and financial reward,” she says.

Public schools are the dominant education provider in Brazil and she added that reforms to improve the quality of education would also need to encompass the syllabus and infrastructure.

The first chair on the right to education in Brazil

The UNESCO chair was the first dedicated to the right to education in Brazil and came about at the suggestion of the then UN Special Rapporteur on Education Mr Kishore Singh (also interviewed for this series).

“Our main concern is to understand how law can help guarantee the right to education. We already have 10 PhDs presented and 15 dissertations on this theme. In addition, we are organizing seminars, workshops and activities with undergraduate students,” she said.

“It is also extremely important that we use the UNESCO Chair network to share experiences and good practices. We need to learn from people who have gone ahead of us and learn from their experience.' she says. “UNESCO has a very important role to play in bringing us together.”

As the Universal Declaration of Human Rights marks its 70th year, UNESCO is launching a digital campaign on the #RightToEducation, a right that is an absolute priority and at the core of its global mission to ensure equal access to quality education. Find out more here.