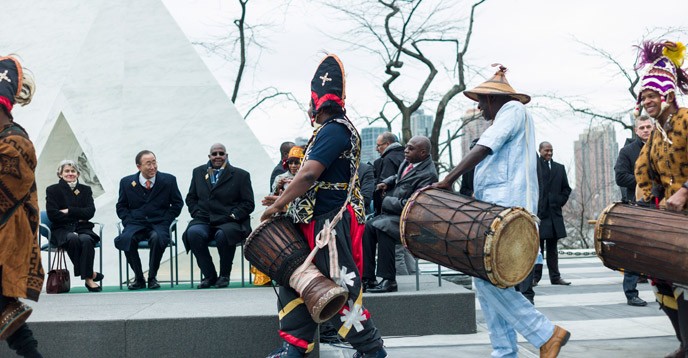 On 25 March, on the occasion of the International Day of the Remembrance of Slavery, UNESCO Director-General, Irina Bokova, participated at the unveiling of the Permanent Memorial for the Victims of Slavery and the Transatlantic Slave Trade that honours the victims of one of the bleakestepisodes of modern history.

The Ark of Return acknowledges the tragedy of the transatlantic slave trade, honours the victims of slavery and the transatlantic slave trade and preserves their legacy. It contains three primary elements. The first, Acknowledge the Tragedy, is a three dimensional map that depicts the global scale of the triangular slave trade. The second element, Consider the Legacy, is a full size human figure lying in front of a wall inscribed with images of the interior of a slave ship. The third and final element, Lest We Forget, is a triangular reflecting pool where visitors can pay tribute to the memory of the millions of souls who were lost.

UNESCO’s Director-General joined Secretary-General of the United Nations Mr Ban Ki-Moon, the President of the General Assembly, Mr Sam Kutesa , the Prime Minister of Jamaica, Mrs Simpson Miller,  the Representative of the African Union to the United Nations, Mr Tete Antonio, Ambassadors and other personalities in delivering remarks.

“This Memorial is a symbol of our determination to pay tribute to all enslaved people and their resistance against the slavery.”  This Memorial is an act of remembrance – it is also a call to action, embodying the principles and values at the heart of the United Nations, reaffirming the universal recognition of this tragedy as a ‘crime against humanity.’” said the Director-General.

Irina Bokova recalled that “UNESCO through its educational and cultural programmes, through its support for the historical research, including through its Slave Route Project or the General History of Africa – has shown the richness of the traditions that the victims cultivated during this terrible time, and that have enriched the whole of humanity” . Ms Bokova also shared the Organization’s commitment to breaking the silence surrounding this human tragedy, noting that the International Decade for People of African Descent offers an opportiintuy to ensure that it is never ignored or concealed.

“It is absolutely vital that the dangers inherent in racism are made crystal clear to all” said UN Secretary-General Ban Ki-moon. “The Ark of Return will bring home to people around the world the terrible legacy of the slave trade. It will help us to heal as we remember the past and honour the victims”.

The Prime Minister of Jamaica insisted that 'on this symbolic day for the African people and people of African descent, it is most opportune to celebrate the freedom that came after a  long  journey with the launch of the permanent memorial at the UN'.

The President of the General -Assemly highlighted the launch of the international decade for people of African descent and specified that the memorial will be one of its major initiatives as it will honour the profound contribution of 'Africans of the diaspora'.

Social and Human Sciences, Protecting Our Heritage and Fostering Creativity