Starting 21 February until 27 March 2020, the exhibition “Us and Them – From Prejudice to Racism” will be displayed in the United Nations Visitors Lobby in New York. It focuses on the International Day of Remembrance of the Victims of Slavery and the Transatlantic Slave Trade (25 March) revolving around this year’s theme “Confronting Slavery’s Legacy of Racism Together”.

Originally launched in March 2017 at the Muséum national d'Histoire naturelle - Musée de l’Homme in Paris, under the patronage of UNESCO, the exhibition highlights the reality of racism and prejudice through the intersections of anthropology, biology, sociology and history.  It aims to make its visitors self-reflect on the construction of their own prejudices and shed light on racist behavior. It also teaches its visitors that racism can be fought against, and is not inevitable. By showcasing the science behind the concept of “race”, the exhibition touches on the evolvement of racism within the transatlantic slave trade; which to this day continues to divide societies. Organized by the Remember Slavery Programme, which is managed by the United Nations Department of Global Communications, in collaboration with UNESCO and the Museum, the exhibition also features UNESCO’s Slave Route Project. 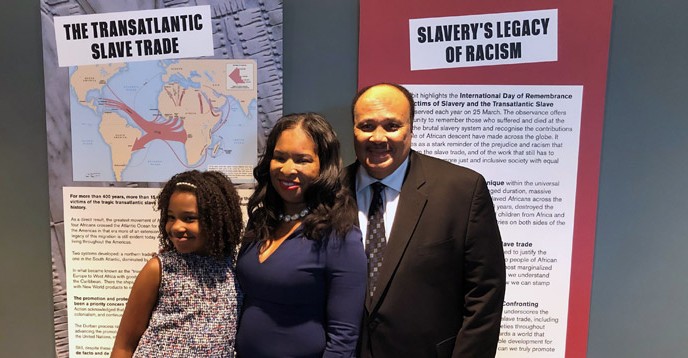 Devoid of any moralizing tone or judgment, it offers a journey that deciphers the reasons for racist and discriminatory behaviour during different moments of history. It also provides keys to understanding the personal reflection to deconstruct prejudices. The public is invited to examine the individual and collective mechanisms that lead to the reject of “the others” and to raise awareness on modern-day discriminations.

This innovative exhibition is an opportunity to remind us that racism is a social construct that has led to many crimes which continue to this day. Through the International Coalition of Inclusive and Sustainable Cities – ICCAR, launched in 2004, UNESCO engages in concrete action in the fight against discrimination and racism at the local level. It has travelled in several cities, including in ICCAR member cities including Laval (Canada), Nantes (France), and Santiago (Chile).