Click to read all the findings in our publication

"Online violence against women journalists: a global snapshot of incidence and impacts"

Carole Cadwalladr, a British journalist who came to prominence by exposing the Cambridge Analytica scandal in 2018, shared her personal experience of online abuse. “As my work started to have an impact, I started getting more followers, and more trolls,” she said. Rana Ayyub, an Indian investigative journalist, provided her own testimony: “it started with rape threats, death threats, doxing”.

The phenomenon affects female journalists, professionally and personally. Thirty percent of those participating in the UNESCO-ICFJ survey said they self-censor as a result of the abuse, and 26% reported impacts on their mental health. “I wanted to quit social media, I wanted to quit journalism. These things don’t happen to men,” noted Ayyub. “The cost that we are paying to amplify our work on social media is not something that journalists should face.”

The onslaught of online hate is often interlaced with disinformation: 41% of the respondents to the survey said they had been targeted in online attacks that appeared to be linked to orchestrated disinformation campaigns. “It’s specifically targeted to discredit journalists, to discredit their work,” explained Cadwalladr.

The journalists called for more transparency and accountability from social media platforms when it comes to the spread of online attacks against women journalists: “The way these platforms treat us is absolutely pathetic,”said Ferial Haffajee, a South African editor and investigative journalist. Cadwalladr added, “we have to call out the platforms. We have to demand accountability”. Results from the survey found that Facebook was rated the least safe of the top five platforms or applications used by participants, with nearly double the number of respondents rating Facebook “very unsafe” compared to Twitter.

Although the effects of online violence on journalism and press freedom can be disastrous, many female journalists continue to show great resilience in the face of constant abuse. “This is an essential frontier for protecting media freedom,” explained Haffajee. “I’m not going to be pushed aside, it took us too many years to get us here”. “It’s incumbent upon us to make some noise about it,” added Cadwalladr.

The speakers saluted UNESCO/ICFJ’s survey as an important milestone in the fight against online violence against women journalists. Julie Posetti reminded that “the crisis is deepening “, and that “it is not an option for women to be invisible”.

The global survey was launched in October 2020 to assess the scale of online violence targeting women journalists around the world and was completed by over 900 participants from 125 countries. The survey is part of a larger global study commissioned by UNESCO to assess the scope and impact of online harassment of women journalists around the world, paying specific attention to the understudied Global South, in order to bring forward concrete recommendations for counter-action.

First results of the global survey were released on the occasion of the International Day for the Elimination of Violence against Women (25 November), while the launch of the report on 10 December coincided with the last day of the 16-day campaign against gender-based violence and with International Human Rights Day.

This project has received financial support from UNESCO’s Multi-Donor Programme on Freedom of Expression and Safety of Journalists and the Swedish Postcode Foundation. 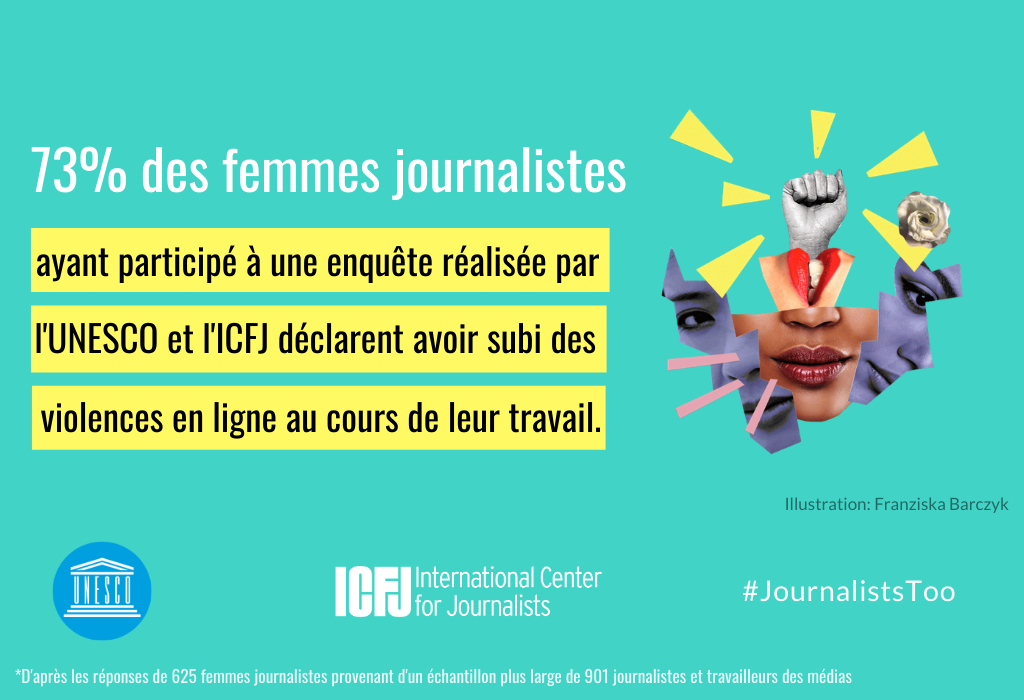 1. From an original sample of 1,210 self-selecting international survey respondents, 901 were accepted as valid detailed analysis. This report is based in a gender-disaggregated analysis of the 714 women-identifying respondents.