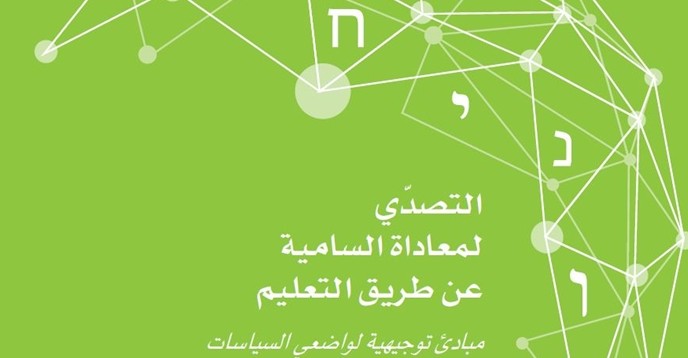 UNESCO’s guidelines for policymakers entitled “Addressing anti-Semitism through education” are now available in Arabic. The guidelines were developed in cooperation with the OSCE Office for Democratic Institutions and Human Rights (ODIHR) as part of UNESCO’s global programme on addressing anti-Semitism through education and were first published in English in June 2018. The Arabic translation of the guidelines has been made possible through the kind support of the Aladdin Project.

The new translation comes at a time where anti-Semitism is of rising global concern: A changing geopolitical climate and new media environment have led to a situation where open anti-Semitism is no longer confined to extremist circles and has become increasingly mainstreamed. A security issue for Jewish communities and individuals across the world, anti-Semitism is also the driving force of a range of violent extremist ideologies.

The impact of contemporary antisemitism is not limited to Jewish people, individually or collectively, but poses a threat to social cohesion: “Antisemitism is the antithesis of freedom of expression. It implies a denial of the other and is an admission of failure, inadequacy, and ability to coexist,” underlined the Prime Minister of Morocco Saadeddine Othmani at the High-Level event “The power of education to prevent racism and discrimination: the case of anti-Semitism”, organized by UNESCO in the framework of the 73rd session of the United Nations General Assembly. The event took place in the presence of the United Nations Secretary General Antonio Guterres, who emphasized the role of education as “one of our most powerful tools” to fight antisemitism in his opening remarks.

The UNESCO/OSCE guide responses to these challenges by offering concrete recommendations for policymakers on how to strengthen national education systems to address anti-Semitism in and through education and to build the resilience of young people to extremist ideologies and prejudice. Based on these recommendations, UNESCO is organizing a series of international workshops for policymakers in cooperation with OSCE/ODIHR and the World Jewish Congress.

As part of this programme, UNESCO is also committed to strengthen the capacities of teachers: UNESCO and OSCE/ODIHR are currently producing, in partnership with the Institute of Education of the University of London, corresponding curricula and materials for pre-service teachers and school directors. In addition, UNESCO will soon publish a series of practical guides for teachers on how to respond to various forms of hate speech in the classroom, including antis-Semitism, anti-Muslim hatred, anti-refugee discourse, and conspiracy theories.

Education about the Holocaust and genocide , Global citizenship education