UNESCO welcomes the establishment of a Global Media Defense Fund, with initial funding by UK and Canada 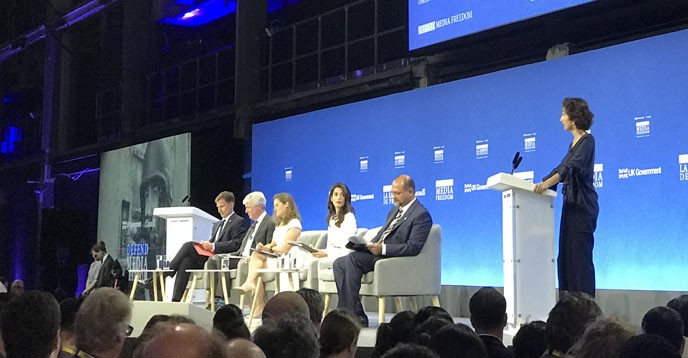 The Director-General of UNESCO, Audrey Azoulay, has warmly welcomed the establishment of a new Global Media Defense Fund at the initiative of the United Kingdom and Canada and their respective pledges of £3 million (US$3,8 M) over five years and of 1 million Canadian Dollars (US$ 765,000) to the Fund.

The purpose of the Global Media Fund is to support the UN Plan on the Safety of Journalists, whose implementation is led by UNESCO, which will also administer the Fund.

“I wholeheartedly welcome the UK and Canada’s support for our work in an area that is crucial for the free flow of information and peace, the objectives that UNESCO was created to promote,” said the Director-General.

“This will help fund legal advice and improve security training for the benefit of reporters working in situations of conflict and danger and to help them uphold their right to freedom of expression and freedom of the press.” Ms Azoulay said. “I call on other Member States to follow the example of the UK and Canada in contributing to this work, which includes reinforcing legal protection for media workers, and fighting impunity that still affects the vast majority of crimes against media workers worldwide. More than ever, we need such multilateral strategies to strengthen media freedom and the safety of journalists more than ever.”

This statement came in response to the launch of the new Fund led by the UK Secretary for Foreign Affairs, Jeremy Hunt and Minister of Foreign Affairs of Canada, Chrystia Freeland, as they co-host the Global Conference for Media Freedom (10-11 july).

As head of the United Nations’ lead agency for freedom of expression, the Director General of UNESCO is representing the UN at the conference where UNESCO’s Assistant Director-General for Communication and Information, Moez Chakchouk, will address a session on Africa at the event and moderate a ministerial debate on the safety of journalists.

More than 50 communication and foreign affairs ministers are attending the conference in London alongside over one thousand media professionals and representatives of specialized NGOs.

This newly created Trust Fund will complement and synergize with other extra-budgetary funding modalities supporting UNESCO work for the promotion of the safety of journalists: the Multi-donor Programme on Freedom of Expression and Safety of Journalists (with substantial contributions from Sweden and Norway), the International Programme for the Development of Communication (IPDC), as well as fund in trust projects.

UN Plan for the Safety of journalists and the Issue of Impunity: https://en.unesco.org/un-plan-action-safety-journalists

Communication and Information, Fostering Freedom of Expression, Media Development and the IPDC, Safety of Journalists, Press Freedom on All Platforms
Canada, United Kingdom of Great Britain and Northern Ireland