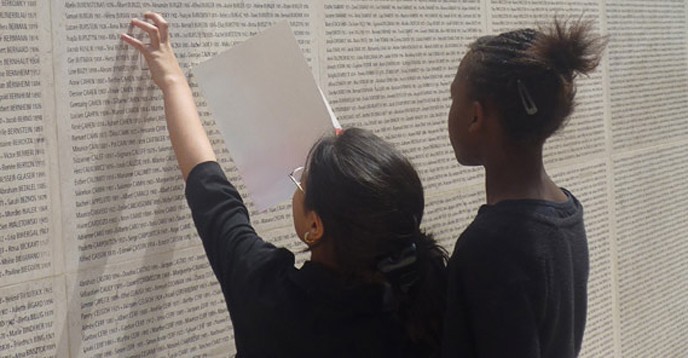 Teaching and learning about the Holocaust and genocide has contemporary relevance in today’s globalized world: it sheds light on the fragility of societies and the destructive power of anti-Semitism, racism and other forms of discrimination, as well as on citizens’ societal responsibilities. For this reason, UNESCO aims to advance teaching and learning about the Holocaust on a global level.

To promote such teaching and learning in Arab speaking countries, UNESCO has now translated its policy guide on education about the Holocaust and preventing genocide into Arabic.

“In the Arabic speaking world, unfortunately, such education does not exist,” explains Mina Abdelmalak, Arab Outreach Specialist at the U.S. Holocaust Memorial Museum, one of UNESCO’s partners. To fill this gap, the USHMM collaborates with student groups, educators and NGOs who are working on pluralism and human rights-related issues in Arabic speaking countries. Through their outreach programme, the USHMM focuses on societal challenges that are reflected in the history of the Holocaust.

Those challenges exist in a range of variations in the Arab world today: “We highlight challenges such as propaganda, the fragility of democracy and the existence of extreme ideologies that promote hatred against groups of people. No society is immune from those challenges”, explains Mina Abdelmalak. Learning about the historical developments that led to the Holocaust can help learners to recognize the dynamics that may fuel conflict and mass violence. This can even help them to identify corresponding warning signs, and to better understand the dangers of propaganda, antisemitism, prejudice and scapegoating.

In Tunisia, UNESCO and the USHMM have collaborated with academics and teachers who put this approach into practice: After they participated in the second International Conference on Education and the Holocaust (ICEH), they implemented a project that is ongoing at the national level. The ICEH was jointly organized by UNESCO and the USHMM in December 2017, the results obtained after the conference are noteworthy: “[The Tunisian ICEH participants] found some similarity between Nazi propaganda and ISIS propaganda”, says Mina Abdelmalak about the idea behind the project. “They are using the UN/USHMM traveling exhibition on the power of Nazi propaganda, “State of Deception”, which examines how the Nazis used propaganda to win broad voter support in Germany, to implement its radical programs and to justify war and mass murder.”

As part of the project, the exhibition is displayed in English, French and Arabic in a range of locations, and is accompanied by workshops and cultural events. The topics covered range from the history of Nazi propaganda, helping learners to build critical thinking skills and to evaluate propaganda, to Tunisia’s history during the Second World War, including German occupation, and the long history of the Tunisian Jewish community.

To support these and similar efforts, UNESCO promotes the translation of valuable education resources into Arabic. The Aladdin Project, launched under UNESCO patronage in 2009, has created a multilingual website with information about the Holocaust and Jewish life and has translated acclaimed literature documenting the Holocaust into several languages, including Arabic. The recently translated UNESCO policy guide on Education and the Holocaust and preventing genocide is an important addition to these resources.

Being the first resource of its kind in Arabic, the guide was welcomed by Mina Abdelmalak: “the guide will hopefully open a door for more Holocaust education in the Arab world. There are no resources for policymakers or curriculum developers that presents the rationale for teaching about the Holocaust, in order to promote global citizenship, or tolerance and human rights, or even national histories.” The USHMM will use the translated guide to inform their exchanges and workshops with Arab audiences.

UNESCO’s activities to promote education about the Holocaust and genocide directly contribute to the objectives of Global Citizenship Education (GCED) to equip learners with the knowledge, skills and competences that allow them to become critical thinkers and active and responsible global citizens that contribute to a more peaceful, tolerant, inclusive and secure world.

GCED is one of the strategic areas of UNESCO’s Education Sector program for the period 2014-2021 and is guided by the Education 2030 Agenda and Framework for Action, notably Target 4.7 of the Sustainable Development Goals (SDG 4 on Education).