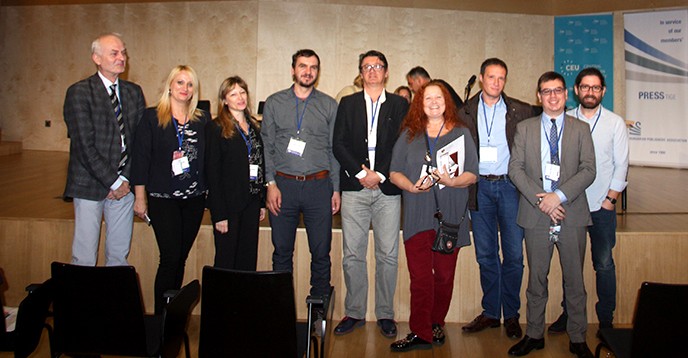 UNESCO presented the results of an in-depth survey about the financing mechanisms of press and media councils at the annual conference of the Alliance of Independent Press Councils in Europe (AIPCE), which took place in Budapest in October 2017. Media councils act as media self-regulation mechanisms, a system set up in order to ensure respect for media professional and ethical journalistic standards.

“The funding systems of press and media councils says a lot about how these bodies function and how they view the question of their independence. Such analysis was also much needed to discuss the sustainability of media self-regulation mechanisms,” said Adeline Hulin, UNESCO Project Officer at the conference in Budapest.

This survey was undertook within the framework of the UNESCO EU funded project "Building Trust in Media in South East Europe and Turkey" which contributes to strengthening the functioning and visibility of press and media councils in this region. The project provides direct funding to media self-regulation mechanisms together with some support for them to adapt to new digital challenges and enhance their outreach towards media readers and viewers. This has proven very successful. Press councils in South East Europe are increasingly used by citizens, have amended some of their statutes and guidelines to adapt the digital world, or have seen an increase in the number of media adhering voluntarily to the system of media self-regulation.

The survey aims at highlighting best practices to guarantee the financial independence and sustainability of press and media councils. This remains a major concern for self-regulatory bodies in South East Europe. But not only. As the economic crisis and the drop in advertising revenues severely hits media revenues around the world, the budget of many media councils has severely been impacted. A session of the AIPCE annual meeting was hence dedicated to this sensitive issue.

Results of the survey (available in the attached article), show that few mechanisms are in place to guarantee the financial sustainability of press councils in Europe and elsewhere, even the ones in place for decades. Most of these bodies rely on the good will of their members or even sometime apply yearly to receive some indirect state subsidies. While the need for media self-regulation and media ethics has never been so high in a context of shrinking trust in media, many press councils are faced with founders unable to enhance their contributions.

The survey highlights that examples of tangible mechanisms guaranteeing either the independence or the sustainability of press and media councils should be searched in statutory media self-regulatory systems where the State acknowledges and or supports this system. However, such a statutory media self-regulation system bears some risks in certain political context, as it might hamper media freedom in the long end.

Fostering Freedom of Expression, Press Freedom on All Platforms
Hungary