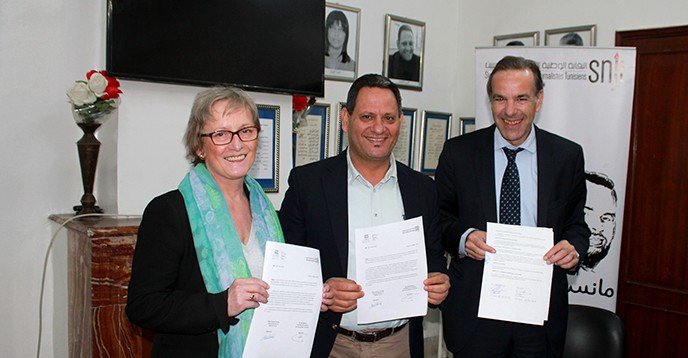 SNJT, UNESCO and OHCHR announce the establishment of a monitoring mechanism to track attacks against journalists in Tunisia
© SNJT

A new monitoring mechanism to track attacks against journalists launched on Tuesday, 21 March 2017 in Tunisia.

Coordinated by the National Union of Tunisian journalists (SNJT), the "Monitoring and Documentation Unit on Attacks against Journalists" is supported by UNESCO and the Tunisia Office of the United Nations High Commissioner for Human Rights (OHCHR).

Ms Sylvie Coudray, Chief of Section for Freedom of Expression at UNESCO; Mr Dimiter Chalev, representative of the OHCHR in Tunisia; the SNJT’s president and members of its executive board; and members of the new monitoring unit attended the kick-off meeting.

The meeting came as part of the SNJT’s efforts, in partnership with UNESCO and OHCHR, to promote the safety of journalists and fight against impunity, within the framework of the UN Plan of Action on the Safety of Journalists and the Issue of Impunity.

This new monitoring unit consists of a team of four specialists, selected through an open call: a project coordinator, two monitors and a lawyer. Their work builds on a series of joint trainings: first trainings on the safety of journalists organized by the SNJT and the UNESCO Project Office in Tunis (between July and October 2016) and then trainings on monitoring and documentation of rights violations organized by the SNJT and OHCHR (between November and December 2016).

This collaboration between the SNJT, UNESCO and OHCHR aims to sensitize and mobilize the various actors in the Tunisian media landscape in order to enhance their ability to protect journalists and defend freedom of expression and information. The unit will contribute to this goal through monitoring and documentation of attacks against journalists and freedom of expression, particularly in relation to the issue of impunity.

The monitoring mechanism will also represent a tool for the media community in Tunisia to provide assistance on specific cases, as well as a resource for national and international press freedom groups in Tunisia. It will enable the SNJT to issue alerts, submit detailed reports and organize campaigns and activities for journalists suffering from serious attacks of freedom of expression.

The monitoring unit could facilitate the creation of the journalists' security center, foreseen in the lead-up to the establishment of a national action plan on the safety of journalists and the fight against impunity in Tunisia.

As a pilot project launched by the SNJT, the monitoring unit’s work will initially last for one year. The project will benefit from financial and technical support from the OHCHR in the first phase and from UNESCO in the second phase, within the context of a project financed by Sweden to promote freedom of expression in the Arab region.

The unit will present the initial results of its work in November 2017 in Tunis at a commemoration event for the International Day to End Impunity for Crimes against Journalists.