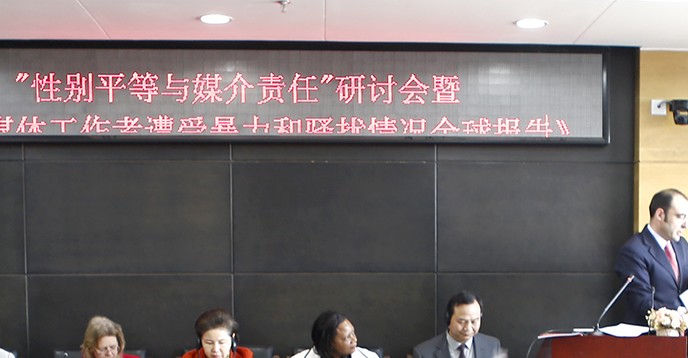 The UNESCO Chair on Media and Gender launched the Chinese translation of the Report on Violence and Harassment against Women in the News Media: A Global Picture at a seminar focusing on gender equality and media’s responsibility, on 20 March 2015 at the China Women’s University in Beijing. More than 60 experts and scholars from gender and media studies, including the co-author of the Report as well as media professionals, joined the seminar.


Opening the seminar, Madam Meng Xiaosi, Vice-President of All-China Women’s Federation noted that “to transform gender equality from words to action, from legislation to practice…in this process, media is indispensable in promoting the value of gender equality, as well as contributing to the better implementation of national policies on gender equality.”

Ms Eunice Smith, Officer in Charge of UNESCO’s Beijing Office, pointed out that UNESCO takes a very strong stand on ending violence against women and on promoting gender equality and women’s rights. Talking about the Report, she noted that “no woman, or any other person for that matter, should have to face violence and threats – we all have the equal right to live free from violence and fear – and that includes female journalists. As such, this report is rather significant in that it identifies the forms of violence and threats faced by women media professionals, as well as the pathologies these threats and violence take, making it possible to develop policies, strategies and actions which can be taken to prevent, protect and eventually prosecute violence against women media professionals.”

Ms Irene Giner-Reichl, Ambassador of Embassy of the Republic of Austria in Beijing shared her memory of the Fourth World Conference on Women she attended twenty years ago in Beijing, which reiterated in the Beijing Declaration that “women’s rights are human rights.” She identified violence against women and women and the media as strategic objectives in the Platform for Action. She noted the changes and progress observed along this twenty year journey, as well as new and remaining challenges.

Ms Alana Barton, Project Director of the International Women’s Media and co-author of the Report presented the development and shared insights of this study with the Chinese audiences. The study noted for example nearly two-thirds of the respondents have experienced “intimidation, threats and abuse” in relation to their work. In addition, half of the respondents answering whether they have experienced sexual harassment while exercising their profession replied affirmatively. Ms. Barton observed that these experiences are taking place all around the world and that many respondents highlighted a lack of training and resources available to prepare them for the possibility of facing violence and harassment in the workplace. Thus the recommendations which are presented towards the end of the publication provide important information on steps which can be taken to prevent and end threats, abuse and violence against women media professionals.

Professor Liu Liqun, Chairholder of UNESCO Chair on Media and Gender and President of China Women’s University closed the forum. She noted that this seminar served as a review of the mission of women development, and also an appeal to media social responsibility. The gather of experts and scholars from different domains brought diversified viewpoints to the debate and promotion of gender equality and women’s empowerment.

The seminar was also inspired by UNESCO’s initiate “Women Make the News”, which is a global action launched by UNESCO aimed at fixing attention on issues relating to gender equality in and through the media, driving debate and encouraging action-oriented solutions until global objectives are met. This year, UNESCO joins forces with the Global Alliance on Media and Gender to launch the annual Women Make the News 2015 initiative under the theme “Yes we must! Reaching Gender Equality in the Media by 2030.”

Fostering Freedom of Expression, Media Pluralism and Diversity, Media Development and the IPDC