"Governments should support measures to protect journalists," said Frank La Rue, UNESCO’s Assistant Director-General for Communication and Information, at the ceremony dedicated to the International Day to End Impunity for Crimes Against Journalists, which was recently held in Bogota.

The celebration began with a tribute to Guillermo Cano, Director of the Colombian daily newspaper El Espectador, who was killed on 17 December 1986 for condemning drug traffickers. Guillermo Cano’s murder is an emblematic case of impunity for crimes against journalists. His career-long commitment to diversity of opinion and the circumstances of his death symbolise the price paid by journalists worldwide for exercising their profession.

During the closing ceremony at the Plaza de Bolivar, Frank La Rue said that despite that 30 years have passed, justice is yet to be served. "The killings of journalists are crimes against the entire society," he added.

In the past 40 years, there have been 153 journalists killed in Colombia. The victims’ photographs and stories are on display at the Plaza de Bolivar in Bogota. According to the UNESCO Director-General Report on the Safety of Journalists and the Danger of Impunity, 827 journalists were killed worldwide between 1 January 2006 and 31 December 2015. Latin America is the third region most affected by journalists’ killings (following the Arab countries and Asia-Pacific), with 176 journalists killed in the last 10 years.

In the framework of the celebration of the International Day to End Impunity for Crimes Against Journalists in Bogota, a group discussion on journalistic practices and values ​​bequeathed by Guillermo Cano Isaza took place. The event included a number of respected regional professionals from the field, including Yolanda Ruiz, Director of RCN Radio News; Jorge Cardona, editor of El Espectador, who was recently awarded the Gabriel García Márquez Prize; Medellin Jose Maria Cano (Guillermo Cano’s grand-daughter), El Espectador; and Ricardo Silva Romero, writer and columnist who moderated the conversation.

The meeting was organized by the Guillermo Cano Isaza Foundation, Gabriel García Márquez Foundation for New Latin American Journalism (FNPI), the Friedrich-Ebert-Stiftung in Colombia (FESCOL), the Centre for Studies in Journalism at the Universidad de los Andes (CEPER), the Faculty of Language and Communication at the University of Javeriana, Andiarios, and the Foundation for Press Freedom (FLIP). USAID, Open Society Foundation, Google Colombia, IFEX and the UNESCO Office in Quito were all supporters of the event.

The event was also attended by May Chidiac, winner of the 2006 UNESCO/Guillermo Cano World Press Freedom Prize. The victim of a car bomb attack on 25 September 2005, Ms Chidiac had one of her hands and her left leg amputated. The tragedy shook Lebanese opinion, which came to see the journalist as a symbol of freedom of expression. May Chidiac left the practice of the profession in 2009 and is now dedicated to activism in denouncing the attacks on journalists.

The celebration ended with the symbolic signing of the Manifesto prepared by the Press Freedom Initiative of the Foundation for Press Freedom (FLIP) and the Guillermo Cano Isaza Foundation and endorsed by the Colombian Association of Publishers of Newspapers and Media (Andiarios). 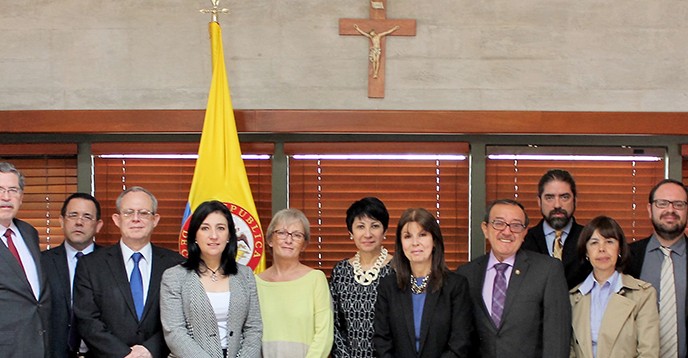 “Mechanisms for the protection of journalists should be supported by Latin American Courts,” declared the UNESCO delegation, which met with the judges of the Constitutional Court of Colombia in Sala Plena.

UNESCO’s Assistant Director General, Frank La Rue, who led the delegation, was pleased with the progress the region is making to address impunity of crimes against journalists and in guaranteeing access to public information. "The response has been positive, many of the security mechanisms are being supported by Supreme Courts in Latin America,” said Mr La Rue. “We also believe that it is important that Constitutional Courts ratify and guarantee freedom of expression in all its forms, in particular freedom of the press. This visit is to congratulate the Court for the work it has done,” he added.

In his speech to the members of the Colombian Constitutional Court, Frank la Rue highlighted the general guidelines for the signed cooperation agreement between UNESCO and the Ibero-American Judicial Summit. The initiative strongly focuses on the protection and promotion of freedom of expression in Latin America by reinforcing and supporting judicial systems in the region. It also includes strengthening the capacities on rights to freedom of expression, access to public information and other correlated rights.

Mr La Rue also spoke about the numerous activities undertaken by UNESCO within the framework of this initiative during the last biennium:

“Peace-building must include institutional strengthening, a culture of peace and education,” explained UNESCO’s Assistant Director-General for Communication and Information Frank La Rue, while addressing the participants of the III Andean Peace Meeting organized by UNESCO’s Office in Quito.

“A peace-building process should start with establishing a peaceful and inclusive society, ensuring equal rights for both men and women. Then justice, transparent and accountable governments and access to public information should be guaranteed,” said Mr La Rue, who also spoke about the importance of communication for development and democracy. In the context of freedom of expression, the media could communicate messages that contribute to the construction of peace.

Frank la Rue also met representatives of civil society organizations and technology companies to discuss the challenges of promoting and protecting freedom of expression on the Internet. Finally, he met with the representatives of the Colombian National Commission for UNESCO and the Ministry of Information Technology and Communication to discuss potential proposals for joint cooperation.