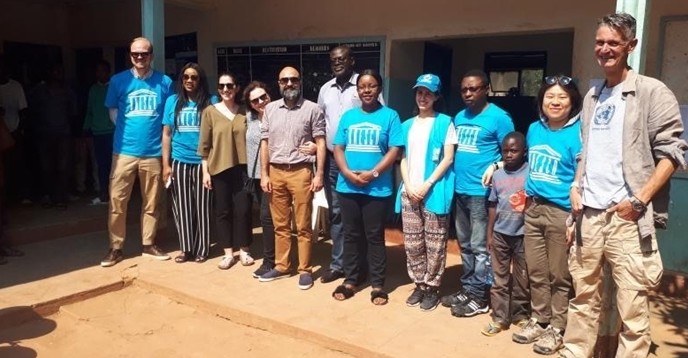 From 27 October to 3 November 2019, UNESCO, with support from UNHCR and together with credential evaluators from the Norwegian Agency for Quality Assurance (NOKUT) and the Zambian Qualifications Authority (ZAQA), conducted the first session of interviews with Qualifications Passport candidates in Meheba Refugee Settlement in the North-Western Province of Zambia.

Refugees in the settlement had high expectation for the interviews: Among 61 applications, 29 interviews were conducted (due to limitation of time) for the first session. During the interviews, the qualifications of 11 candidates were substantiated and they will be issued with a UNESCO Qualifications Passport, as announced by UNESCO Director-General Audrey Azoulay during the Ministerial Meeting on inclusion and mobility in Higher Education at the General Conference. UNESCO believes that this new tool – an interview based assessment methodology of qualifications – will contribute to re-starting refugees’ new life in the host country.

By the end of 2018, UNHCR figures suggest that there were about 22,000 people living in the Meheba settlement, which includes 12,305 refugees and 9,122 former refugees. During the mission, the refugee population in the settlement expressed their interest in the UNESCO Qualifications Passport, regarding it as a valuable tool that could help them to build up their self-resilience. Both the Zambian Commissioner for Refugee and the local refugee officers from Zambian Ministry of Home Affairs have voiced their confidence in the value of the UQP as a tool for refugees to recommence their lives.

The UQP also has the potential of becoming an apparatus supporting local authorities to create a more inclusive environment for refugees to continue their studies and/or seek for employment opportunities.

Learn more about the UNESCO Qualifications Passport for Refugees and Vulnerable Migrants.