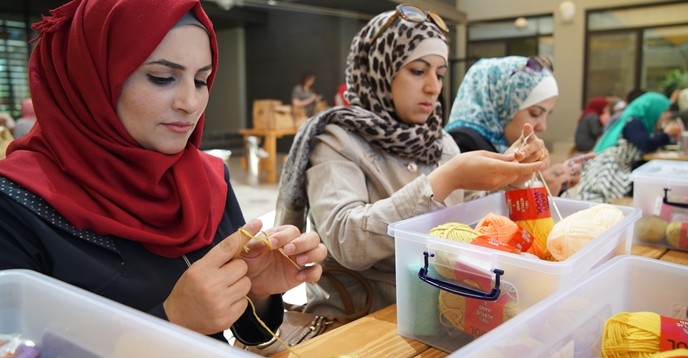 “Before, I was alone at home,” says Rasha, who was already married at 15 and missed the chance to pursue her education. “Now I have new friends and I feel supported by the other girls and we treat each other like sisters.”

Rasha met her new friends at an innovative UNESCO project that is providing practical entrepreneurship and innovation tools to young Syrian and Jordanian women, through technical, income-generating handicraft training.

With her two children in school, Rasha leapt at the chance to join the project and learn new skills. She says that as a participant, she learned a host of skills including embroidery, crochet, sewing and weaving. Her favorite handicraft skill? Embroidery.

The 500 participants of the project are also being supported with life-skills and work readiness training in an effort to improve their chances of strong participation in the labour market.

The UNESCO Amman office supports programmes that encourage and enable girls and women to participate in and contribute to their families, communities and economies more broadly.

In the context of the Syria crisis, UNESCO is focused on critical areas such as technical and vocational education and training, life-skills, secondary education and higher education.

Projects such as these touch on key aspects of the 2030 Agenda for Sustainable development, focusing particularly on SDG 4 and 5 with an understanding that education — in all its various forms — is a basic human right.

This ambitious project was designed with the goal of helping young women develop business and vocational skills and began in November 2016.

It has been implemented with JRF’s support through eight community-based organizations and across seven communities including Ajloun, Jerash, Madaba, Mafraq, Irbid, Ramtha and Amman.

The inclusive nature of the project encourages an open dialogue between Syrian and Jordanian women in Jordan, based on their shared experiences and engagement.

Rasha enjoyed the life-skills component of the project and the team spirit fostered by the resulting sense of empowerment the girls experienced. “Now I know how to prepare for a job interview,” she said.

Using her new skills, Rasha would really like to work outside of the home and is hoping that more courses like this one will be offered so she can take her talents to the next level.

Another young participant, Wesal, partook in the handicraft programme while also pursuing a bachelor’s of arts at a Jordanian University. “When I am not studying, I have nothing to do. I need to focus my mind on something constructive like handicraft creation and this in turn gives me positive energy,” she said.

Wesal is already generating some income, selling her creations to members of her local community and using the money to support her studies.

"The trainers have taught me that strength of character is what matters and that we must work to depend on ourselves.”

The project is funded by Proctor and Gamble and is being implemented by the Jordan River Foundation (JRF), a non-profit, non-governmental organization established in 1995 and chaired by Her Majesty Queen Rania.

This article was originally published by the UNESCO Amman office.