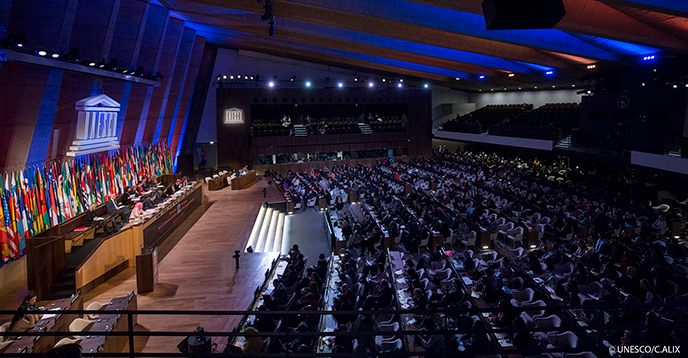 UNESCO’s Member States on Tuesday closed the 39th session of the Organization’s General Conference with the adoption of a series of programme and budget decisions, reaffirming the pertinence of the Organization to the challenges facing the world.

During the session, the Organization’s Member States also elected Audrey Azoulay as the 11th Director-General of UNESCO.

Speaking of the pertinence of UNESCO’s mandate to foster solidarity and cooperation in education, the sciences, culture and communication during her investiture as Director-General, Ms Azoulay said that “facing the global challenges of today, against obscurantism and deadly oversimplification, we [UNESCO] hold the only sustainable and credible answer.”

Climate change and efforts to contain it featured prominently on the General Conference’s agenda and Member States stressed the need for UNESCO’s Social and Human Sciences Sector to work on the ethical and societal aspects of this crucial issue.

This concern led to the adoption of a Declaration of Ethical Principles in Relation to Climate Change, on the need to respect ethical principles to avoid damage and injustice. The Declaration also reaffirms the importance of a scientific approach to climate change, stating, “decisions should be based on the best available knowledge from the natural and social sciences.”

Also in the context of work concerning UNESCO’s Social and Human Science Sector, the General Conference updated the 1974 Recommendation on the Status of Scientific Researchers. Key aspects of the updated recommendation, concern the responsibility of science with regard to the ideals of human dignity, progress, justice, peace, welfare of humankind and respect for the environment. It calls on States to promote science as a common good and calls for inclusive and non-discriminatory work conditions and access to science education and employment.

Within the framework of the Natural Sciences Sector, the General Conference adopted an updated strategy for action on climate change. It requires UNESCO to support Member States in the development and implementation of climate change education and public awareness programmes and policies. UNESCO is also to promote interdisciplinary climate knowledge and scientific cooperation for climate change mitigation and adaptation. The strategy notably upholds the principles of respect for cultural diversity and cultural heritage conservation and is mindful of the need for inclusive social development, intercultural dialogue and gender equality principles in relation to climate change mitigation and adaptation.

Also concerning the natural sciences, Member States adopted 16 May as International Day of Light and asked the Director-General of UNESCO to support efforts to have the United Nations’ proclaim 2019 as the International Year of the Periodic Table of Chemical Elements.

For the Communication and Information Sector, Member States reaffirmed UNESCO’s mandate to defend freedom of expression and access to information both on and off-line, as inalienable human rights. They also reaffirmed the importance of work to protect the safety of journalists with Member States and throughout the UN system, notably through the Organization’s leadership in the UN Plan of Action on the Safety of Journalists and the Issue of Impunity.

The General Conference also endorsed the Call for Action adopted at the end of the Quebec-UNESCO Conference, Internet and the radicalization of youth: preventing, acting and living together, co-organized by UNESCO’s Communication and Information Sector. It furthermore mandated the Sector to continue working on a possible recommendation on Open Education Resources with a view to reinforcing international collaboration in this area.

As regards to education, the General Conference reaffirmed the Organization’s role in coordinating and monitoring progress towards the 2030 Sustainable Development Agenda’s Goal for education, SDG 4. It also mandated UNESCO to pursue work on the development of a Global Convention on the Recognition of Higher Education Qualifications, to improve academic mobility, enhance international cooperation, and reinforce trust in higher education systems.

With regard to the Culture Sector, the General Conference revised the strategy it adopted two years ago for UNESCO’s work in protecting culture and cultural pluralism in the event of armed conflict. The revised strategy now covers natural disasters alongside armed conflicts.

Member States also launched an Appeal on Protecting Culture and Promoting Cultural Pluralism as a key to lasting peace. The appeal calls for culture, cultural heritage and diversity to be factored into international humanitarian, security and peacebuilding policies and operations, building on UN Security Council Resolution 2347. The resolution, adopted in March this year, recognizes “attacks against sites and buildings dedicated to religion, education, art, science or charitable purposes, or historic monuments may constitute, under certain circumstances and pursuant to international law, a war crime and perpetrators of such attacks must be brought to justice.”

The General Conference decided to allot an integrated budget of $1.2 billion to UNESCO for 2018-19. This includes a regular programme budget of $595.2 million as well as voluntary contributions for specific actions from both public and private sources.