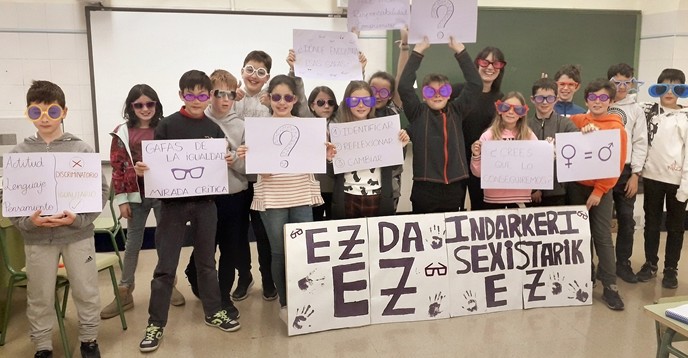 A holistic programme dismantling gender stereotypes and carving out a space for equality in the classroom for all ages has won the 2019 UNESCO Prize for Girls' and Women's Education.

The awarded project, SKOLAE: Berdin Bidean Creciendo en Igualdad (Growing in Equality), is a pioneering coeducational school programme developed by the Department of Education of the Government of Navarre, Spain.

Maria Chivite Navascués, President of Spain’s Navarre region, accepted the Prize on behalf of the Department of Education during the annual award ceremony at UNESCO Headquarters on the International Day of the Girl Child on 11 October 2019. Held as part of the special event, Girls’ education: A force for gender equality and lasting change, the ceremony attracted over 600 participants and included messages from Peng Liyuan, UNESCO Special Envoy for the Advancement of Girls’ and Women’s Education and UNESCO’s Director General, Audrey Azoulay.

Achieving gender equality in the classroom and beyond

SKOLAE teaches students how to acknowledge, understand and confront inequality in all domains including gender, culture, religion, social class and sexual orientation or identity. The programme broadens the scope of comprehensive sexuality education and embeds it in the curriculum at all levels.

While designed to be implemented in the classroom, SKOLAE works to involve the whole school, families and the wider community with the goal of preventing all forms of violence against girls and women and reflecting on how to achieve gender equality.

“Teachers have observed an increase in girls’ confidence levels and report that all students are being empowered to speak out, freely and openly, about previously difficult or taboo topics”, said SKOLAE’s programme coordinator.

The programme provides tailored, age-appropriate educational activities for students aged 3 to 18 in different subjects. For example, a physical education class may include an activity designed to challenge the idea that girls cannot play sports.

“There is great emphasis on building critical thinking to enable students to challenge prevailing stereotypes and reflect on differences in culture that might exist at home or elsewhere”, said the programme coordinator.

All activities under the programme offer students models, opportunity for reflection, educational experiences and individual and collective learning processes. This contributes to the development of equal and respectful emotional, social and sexual relationships, while building students’ autonomy, critical thinking and leadership skills.

The methodology has been adapted for each age group with an emphasis on practice rather than theory. For example, while the youngest might learn about equality through their family or stories such as fairy tales, learners at primary level will discuss topics such as love, jealousy, possessiveness and social networks.

As students grow older and consider relationships, and complex issues such as defending the freedom and safety of girls, the programme introduces activities aimed at promoting positive masculinity, for example.

As the programme coordinator shared, “Evidence collected from the programme’s pilot phase show that real and positive changes in classroom culture are happening.”

Established in 2015 with generous funding from the Government of the People’s Republic of China, the UNESCO Prize for Girls’ and Women’s Education is granted annually to two laureates and consists of an award of US$50,000 to each laureate to help further their work in the area of girls’ and women’s education.