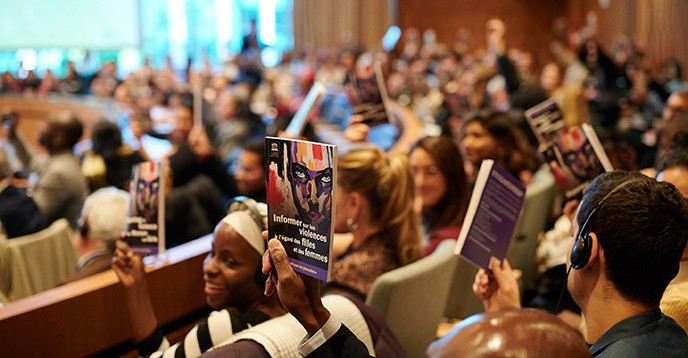 On the occasion of the International Day for the Elimination of Violence against Women, and with the support from the Canadian Commission for UNESCO, the Permanent Delegation of Canada to UNESCO, and in collaboration with France Médias Monde, UNESCO launched the publication “Reporting on Violence against Women and Girls: a Handbook for Journalists” on 22 November 2019 at UNESCO Headquarters in Paris.

The event aimed to encourage and stimulate reflection on media’s coverage of violence against women and girls, raise awareness among the audience on media’s potential impact in eliminating gender-based violence, and generate interest among media professionals and other stakeholders for reading and applying the handbook. By promoting good practices in reporting on violence against women and girls (VAWG), the event showcased UNESCO’s progressive stance in recognizing the urgency and epidemic nature of VAWG, as well as the Organisation’s support to media in preventing and mitigating VAWG.

During the open debate that followed, many in the audience affirmed the urgency of the publication, sharing their own experiences or anecdotes from their professional life with regards to the issue. Others asked questions to the speakers concerning the challenges and opportunities facing media when reporting on gender-based violence, notably in an increasingly digitalized and information intense society. Several participants inquired on how to best implement the publication. UNESCO confirmed it could also be used by organizations working in the field.

The launch took place as a side event to the 40th session of the General Conference of UNESCO and was moderated by Ms. Virginie Herz, journalist and producer at France 24, and Gold Winner of the “Ricardo Ortega Memorial Prize for Broadcast Journalism at the 2018 UN Correspondents’ Association Award”. With more than 200 registered participants, in addition to delegates attending UNESCO’s General Conference, the event gathered journalists, NGOs, international organization representatives, other professionals and students.

Inaugural words were pronounced by H.E. Ms. Elaine Ayotte, Ambassador and permanent delegate of Canada to UNESCO, and Mr. Sébastien Goupil, Secretary-General of the Canadian Commission to UNESCO. Both underlined their firm support to the publication in view of the urgency for media to ethically address violence against women and girls to achieve gender equality. Ms. Mirta Lourenço, Chief of Section for Media Development and Society and Master of Ceremony of the event, then gave the word to Mr. Guy Berger, Director for Freedom of Expression and Media Development at UNESCO, who briefly presented the publication, its content and structure.

Numerous international organizations, NGOs and media professionals welcomed the publication, and some expressed their hope for future translations into other languages. The Liaison Officer of the Permanent Observer Mission of the Islamic Educational, Scientific and Cultural Organization (ISESCO) to UNESCO, affirmed the organization’s support for the publication and announced that ISESCO will fund its translation into Arabic, as well as activities to apply the handbook in the Arab region.

Closing the event, Ms. Saniye Gülser Corat, Director of the Division for Gender Equality in the Office of the Director-General of UNESCO, spoke of the importance of informed and ethical reporting and reaffirmed UNESCO’s support to raise awareness and build capacities of media professionals to promote gender equality.

The handbook “Reporting on Violence against Women and Girls: a Handbook for Journalists” is currently available in French and English, and will be available in Arabic and Spanish in 2020.

Read more about the launch and the publication !

Communication and Information, Fostering Freedom of Expression, Media Diversity and Gender Equality, Violence against Women and Girls in the Media