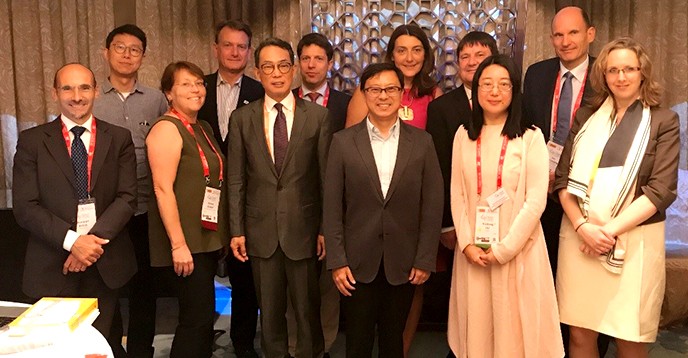 participants in UNESCO’s consultation on IU indicators at the 39th ICDPPC.
© Aki Cheung

“UNESCO’s consultation on Internet Universality indicators is a bold initiative to measure Internet development, breaks the silos of the privacy and data protection community, and fosters dialogue among stakeholders”, concluded Internet experts during the 39th International Conference of Data Protection and Privacy Commissioners (“ICDPPC”),  held in Hong Kong, China, on 27 September 2017.

The consultation session was attended by 25 Internet experts including data protection commissioners, privacy experts, IGOs, academia and members of civil society. UNESCO representative Xianhong Hu presented the Organisation’s new project “Defining Internet Universality Indicators”. The initiative aims to develop indicators for governments and other stakeholders to measure Internet development at the national level and promote the norms and values based on the ROAM principles (which encourage that the Internet governance should be based on human Rights, Openness, Accessibility, and Multi-stakeholder participation).

“The indicators should be used to promote progressive development rather than for ranking the states. The indicators should also be future-oriented and address the forthcoming challenges of big data, artificial intelligence, etc.”, stated Jan Kleijssen from the Council of Europe. Mr. Kleijssen suggested to include the security of both network and users and the safety of women and girls as crosscutting issues for the indicators and added that the risk of Internet fragmentation needed to be considered by the indicators.

Bojana Bellamy from the Centre for Information Policy and Leadership highlighted the triangle roles of visionary regulators, strategic governments and responsible companies which serve as a foundation of any Internet regulation.  Stephen Kai-yi Wong, Privacy Commissioner for Personal Data of Hong Kong, and Hannah McCausland, from the Information Commissioner’s Office of the UK, stressed the role of privacy and data protection regulators and said that “regulators should be able to develop projects that enable people to exercise their privacy and data protection rights on the Internet”.

Marc Rotenberg, President of EPIC, pointed out the difficulty to achieve real privacy protection. John Edwards from the Office of the Privacy Commissioner (New Zealand) said that he considered online privacy as a “precondition” to gain other rights, including women’s rights. Moreover, Mario Oetheimer from the EU Fundamental Rights Agency and Jack Linchuan Qiu, Professor at Hong Kong Chinese University, expressed their concerns regarding human rights as individual and collective rights in the digital age and called for putting this category of indicators at the heart of the project.

Dr. Angus W.H. Cheong, Founder and CEO of ERS e-Research & Solutions, emphasized the idea that the accessibility dimension of the indicators (measured by indicators on gender, occupation and age) was key to reduce the digital divide. Stephen Kai-yi Wong also pointed out that the elderly should not be forgotten in this category of indicators.