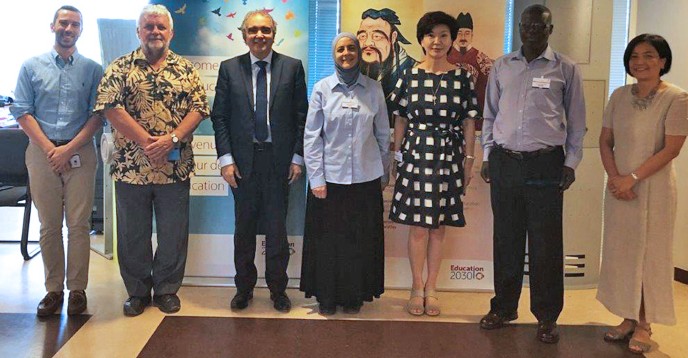 On 3-5 July 2019, UNESCO Secretariat and the members of the Jury for UNESCO International Literacy Prizes gathered at HQ to choose the best five projects out of the 62 submitted, after a global call for applications.

The emphasis this year was on the theme Literacy and Multilingualism, which is also the focus of this year’s global event for International Literacy Day, 9 September.

Since 1967, UNESCO International Literacy Prizes have rewarded excellence and innovation in the field of literacy to support effective literacy practices and encourage the promotion of dynamic literate societies and bridge the literacy gap.

Pending the announcement of the five prize winners by the Director-General of UNESCO on International Literacy Day, which will be awarded at an official Prize giving ceremony on the 9 September, the International Jury shared their views on the importance of literacy and what makes a literacy project impactful.

Willy Ngaka, has been the founder of the Uganda Rural Literacy and Community Development Association and is the convener of National annual intergenerational, cross-cultural and multilingual literacy conferences in Uganda. For Dr Ngaka, literacy is not only the most fundamental skill but also “an instrument to bring peace in an era of tension between communities. A tool to unite people and bring social and economic development”.

Jianhong Dong, member of the Expert Committee of the Chinese National Commission for UNESCO, added that literacy is all the more relevant when it is contextualised using both new technologies and traditional methods. Ms Dong added the relevance of literacy in the context of migration. Sowonne Tchang, a renowned Korean Linguist, drew from her Korean background and the writing system developed by King Sejong, insisting on the key role played by language in economic and social development.

John Benseman, a former teacher has been working on evaluating family literacy programmes and identifying specific adult literacy and language programmes. Literacy is, for this jury member from New Zealand, to have the skills to interpret the world and to understand it.

“Literacy helps get the confidence to follow through on using that information to change what you want to change and to shape your world,” said Mr Benseman.

Rana Dajani, which is one of the most influential women scientists in the Islamic World and which has a lengthy experience with refugees, explained how fundamental the role of literacy is in society for children as “they will later grow up to be lifelong learners and change makers.”

“The children learn through literacy to have the confidence and courage be the heroes they read about so that they become change makers in their own community”, said Rana Dajani.