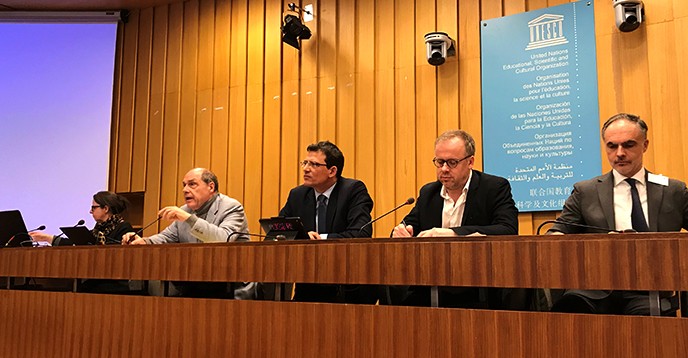 The Journalism Trust Initiative, proposed and organized by Reporters Without Borders (RSF) and its partners, EBU, AFP and GEN, gathered its group of stakeholders at UNESCO headquarter on 5 February 2018. This group composed of representatives of media outlets, regulatory authorities, tech companies, academia and international organizations discussed the first drafts of indicators to identify trustworthy journalism under the European Committee for Standardization’s (CEN).

The Journalism Trust Initiative (JTI) aims at creating a mechanism to reward media outlets for providing guarantees regarding transparency, verification and correction methods, editorial independence and compliance with ethical norms to guide in the future both human and algorithmic decision making in news distribution and consumption.

On this occasion, UNESCO’s Assistant Director-General for Communication and Information, Moez Chakchouk, re-affirmed the organization’s commitment to strengthening quality journalism across the globe. In its opening remarks he underlined “we welcome the goals of the Journalism Trust Initiative, namely to supporting the sustainability of independent journalism, by fostering enabling environment for press freedom, in particular promoting transparency and compliance with professional standards.”

“JTI is the missing link between journalistic principles and methods on one side, and algorithms on the other”, said Christophe Deloire, RSF’s Secretary General. “The algorithmic distribution of online content does not include an “integrity factor” and amplifies everything that goes against journalistic professional norms – sensationalism, rumours, falsehoods and hate,” he added. Therefore existing best practices of the journalistic trade need to be translated to code of the Internet.

The JTI’s drafting committees are composed of industry professionals only, representing major media outlets as well as professional organizations and NGOs. “The process of developing these indicators must be fully self-regulatory: It must be us, the journalist’s community, to take the lead!” highlighted Bertrand Pecquerie from GEN.

Representatives of some media outlets from South East Europe were invited to join the JTI meeting through the UNESCO EU-funded project “Building Trust in Media in South East Europe and Turkey”. Those outlets were selected in partnership with the Ethical Journalism Network based on their interest to performing media ethical audits, an activity already implemented in the region in the framework of the project to strengthen media good governance and transparency. Piloting and testing the JTI indicators with these outlets in the future was an idea raised and discussed at the meeting.

Another two workshops of the JTI are planned including a public consultation phase before the results will be published at the end of 2019. There is a substantial demand for these indicators, on the side of major platforms, advertisers, but also regulators and the media sector itself. “We have an opportunity for a breakthrough in providing reliable and trusted news more prominently to the public and making it easier for them to find it”, reminded EBU.