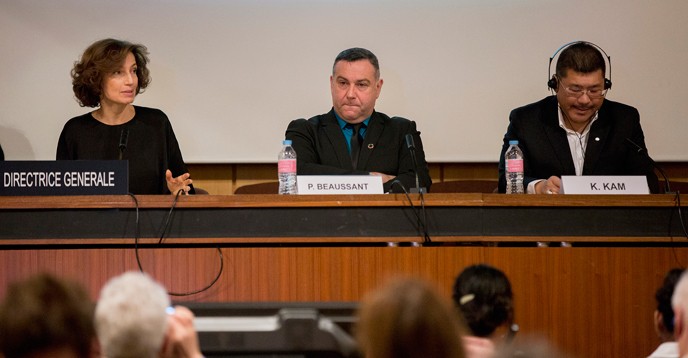 “It was important for me to be with you today, right at the start of my mandate” said the Director-General. “Over time, the relationship between UNESCO and NGOs has varied in intensity, but what remains more true than ever today is the need to preserve and nurture this essential cooperation to cope with the challenges of today’s world and adapt to those of tomorrow,” she said. “In this sense, the theme chosen for this 8th International NGO Forum – Climate Change – is a good example of our shared responsibility towards this key challenge of our time. The privileged partnership between NGOs, which are laboratories of civil society, and UNESCO can enable advances in this regard. As frontline partners of our work, NGOs cannot act alone without the relays provided by our Organization, and I am committed, in the wake of renewed cooperation in recent years, to continue in this direction of constructive and mutually fruitful collaboration,” said the Director-General.

In his introductory remarks, the President of the International Conference of NGOs, Philippe Beaussant, referred to the new directives for the cooperation between UNESCO and NGOs, adopted by the General Conference of the Organization in 2011. “These guidelines, which we have favourably welcomed, have allowed a fruitful change in the role of NGOs, and their better and more systematic involvement in UNESCO’s fields of action,” said Mr Beaussant. “We are convinced that this link with UNESCO, which is still developing, will gain new impetus under your mandate, Madam Director-General.”

“In this spirit, we are delighted to hold the 8th International NGO Forum, an inclusive and participatory mechanism which is a response to the expectations of the 2011 guidelines, and that is an opportunity to propose paths for concrete action,” continued Mr Beaussant.

The President of the Kenn Foundation, Kenneth Kam, called for “new involvement of non-governmental organizations. This International NGO Forum, which provides a truly global environment, can help to reflect and act on issues of importance to UNESCO, the international community and civil society,” said Mr Kam. “The theme chosen for this 8th Forum is particularly important, and I want to say here how much I believe in UNESCO’s mission, and I hope that we will continue to consolidate our cooperation.”

Two years after the Paris Climate Agreement, and a few days before the One Planet Summit organized at the initiative of French President Emmanuel Macron and the United Nations, the 8th NGO Forum brings together more than 300 representatives of civil society to share their vision of the contribution of NGOs to the fight against climate change, and more specifically to the implementation of UNESCO's updated Strategy for addressing climate change, adopted by the General Conference of the Organization at its 39th session in November 2017.

Over two days of debate, the Forum aims to identify ways of action for NGOs to support the work of UNESCO and make recommendations to the Organization in its various fields of competence. The debates will focus on three central themes: the role of civil society organizations in addressing climate change; Ocean and climate change; and World Heritage, Biosphere Reserves, and the knowledge and actions of indigenous peoples. The discussions will also define a concrete plan of action in relation to UNESCO's Declaration of Ethical Principles relating to Climate Change, recently adopted by the General Conference of the Organization.

Previous editions of the International NGO Forum were held in Beijing (China), Querétaro (Mexico), Riyadh (Saudi Arabia), Sozopol (Bulgaria) and Yamoussoukro (Côte d'Ivoire), and addressed topics such as the social engagement of young people, building peace, access to water, women and poverty, bringing cultures closer together, and the role of youth in safeguarding cultural heritage, and resulted in creation of several local and international initiatives that contribute today to the realization of UNESCO's programme.