Paris, 25 January — One year into the COVID-19 pandemic, over 800 million students, more than half the world’s student population, still face significant disruptions to their education, ranging from full school closures in 31 countries to reduced or part-time academic schedules in another 48 countries, according to new data released on UNESCO’s interactive monitoring map.

The map shows that globally, schools were fully closed for an average of 3.5 months (14 weeks) since the onset of the pandemic. This figure rises to 5.5 months (22 weeks) – equivalent to two-thirds of an academic year – when localized school closures are taken into account.

The duration of closures varies greatly by region, from as many as 5 months (20 weeks) of complete nation-wide closures on average in Latin America and the Caribbean countries, to 2.5 months (10 weeks) in Europe, and just one month in Oceania.

Similar regional variations are observed when accounting for localized closures: The duration of complete and localized closures exceeded seven months (29 weeks) on average in Latin America and the Caribbean compared to the global average of 5.5 months (22 weeks).

Governments have endeavoured to minimize country-wide closures – down from 190 countries at the peak in April 2020 to 30 countries now –in favour of partial and/or local closures. Schools are now fully open in 101 countries.

Prolonged and repeated closures of education institutions are taking a rising psycho-social toll on students, increasing learning losses and the risk of dropping out, disproportionately impacting the most vulnerable. Full school closures must therefore be a last resort and reopening them safely a priority.

Data released today by UNESCO’s Global Education Monitoring Report shows that, even before the COVID-19 crisis, only 1 in 5 countries demonstrated a strong commitment to equity in education through their financing mechanisms, and there is little evidence of a strong equity angle in COVID-19 responses. 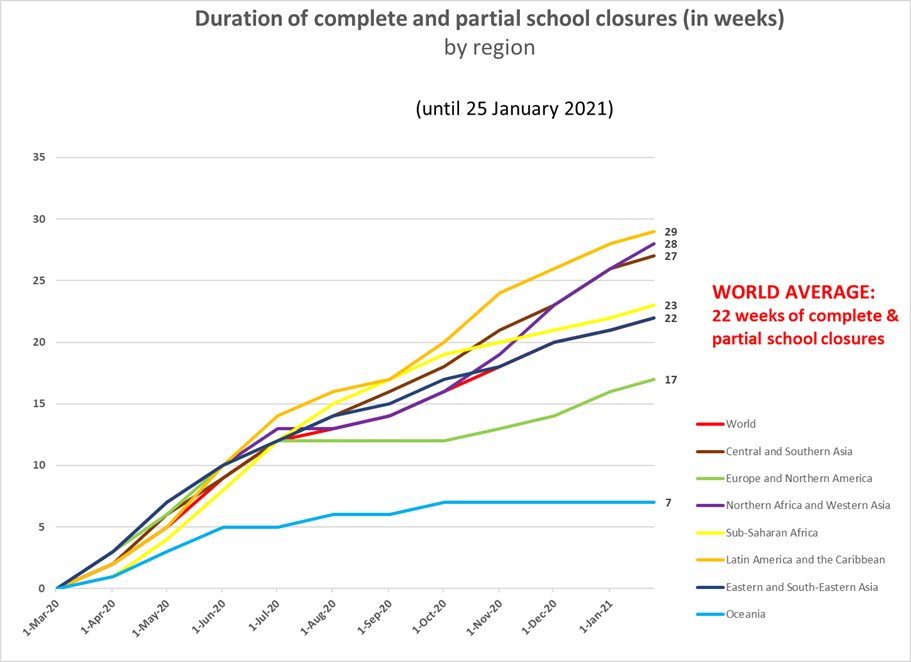 We need an adequately financed recovery package to reopen schools safely, targeting those most in need and setting education back on track for the COVID-19 generation. Today, on International Day of Education, I call on countries and partners to prioritize education, a global common good, in the recovery.

UNESCO’s celebration of International Day of Education calls for increased and better financing of education, and draws attention to the low priority allocated to education in recovery efforts.

UNESCO data shows that the sector only receives an estimated 0.78% of relief packages worldwide. Additionally, aid to education looks set to decline by 12% as a result of the pandemic. According to our findings, the pandemic also stands to increase the funding gap for education by one third to as much as $200 billion annually in low and middle-income countries, representing close to 40% of total cost. Upfront investment in catch-up and remedial programmes will save money down the line reducing by 75% the cost of repairing the damage caused by COVID-19.

At the Global Education Meeting convened by UNESCO in October 2020, governments and partners committed to protect education budgets and to focus the recovery on the safe and inclusive re-opening of schools, and support for teachers, skills development and connectivity for all.

To enable a safe return to school, UNESCO has called for the world’s 100 million teachers and educators to be given priority in vaccination campaigns.

To mark the International Day of Education, UNESCO and the Global Partnership for Education, with UN Headquarters, are co-organizing an event to stress the necessity to protect and mobilize equitable funding for education, give voice to 'community heroes' who acted to leave no learner behind during school closures, and present innovations that pave the way towards more resilient and inclusive education systems.