UNESCO embarks on board Energy Observer, the first hydrogen ship 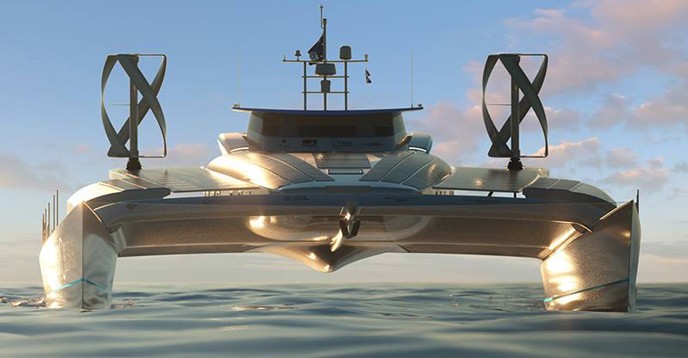 Energy Observer will count with UNESCO’s support as it carries out its mission, to promote renewable energies and raise awareness of energy transition challenges. As it sails across the world during six years without a drop of fossil fuel, with 101 stops planned between 2017 and 2022 in the world's maritime capitals, historic ports, nature reserves or at major international events, the first zero carbon footprint ship will have the institution onboard.

Drawing energy from nature, without damaging or wasting it, is Energy Observer’s vision for the future. In an unprecedented accomplishment, the boat combines various sources of renewable energies to produce its own hydrogen from sea water and store it on board. This promising energy architecture aims to enable navigation that is 100% energy autonomous, without emitting any greenhouse gases or fine particles. The journey aboard a laboratory floating in extreme environments will be carried out by those who first dreamed of the adventure: Victorien Erussard, offshore runner and merchant navy officer, and Jérôme Delafosse, explorer and documentary filmmaker.

UNESCO representatives will be involved in the development and implementation of the mission through the Energy Observer Steering Committees. It is a promising and ambitious partnership, with a highly symbolic stopover in New York, where the ship might moore on the Hudson at the foot of the United Nations Headquarters.

Powered by renewable energies and hydrogen using this energy mix, Energy Observer will leave its home port of Saint-Malo in the spring and later set off from Paris for an unprecedented odyssey around the world to test energy transition solutions in real conditions, while raising awareness and promoting education for sustainable development.   Energy Observer's on-board audiovisual team will also collaborate on multimedia projects in biosphere reserves during the ship's world tour.

Partnerships, Science for a Sustainable Future, Partner for Natural Sciences, Building Capacity in Science and Engineering, Science for Society
France