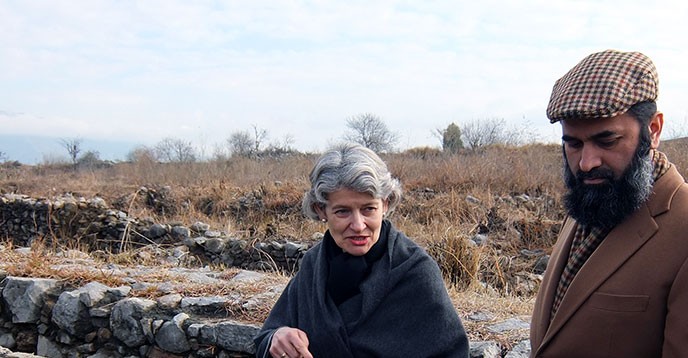 Abdul Nasir, Director Taxila Museum gave the Director-General a guided tour of the Museum. The Director-General inquired about the specifics of the sculptures and other objects dating back to Gandhara period. She also spent some time at the Museum Rest House which used to be the residence of Sir John Marshal, Director General of Archaeological Survey of India during 1902-1922, where she was briefed about the development activities on the site and museum.

“The people of Pakistan must be proud of its heritage. Taxila is a unique site showing so many layers of civilizations in this country, starting with prehistoric heritage and moving to the Greeks, and moving to Buddhist and Islamic culture… this is a wellspring of creativity, an open book for tolerance, mutual understanding and dialogue, both within the country and abroad.” she declared.

Later the delegation led by the Director-General was driven to visit the remains of Sirkap site. Speaking to the Museum authorities and media she said that the Taxila Site and the Museum has a great potential to attract national and international visitors and enjoy the first hand experience of being at the unique historical sites of antiquities and human settlements of Gandhara Buddhist heritage. She appreciated the efforts made by the federal and provincial governments in the restoration and preservation of historical artifacts and sites of Taxila. While taking to the media she emphasized on involving community especially youth in the preservation and protection of their Cultural Heritage.

Taxila, one of the six World Heritage sites of Pakistan, is inscribed on the World Heritage List in 1980. Comprised of a vast complex of archaeological heritage, the site includes a Mesolithic cave, 4 settlement sites, a number of Buddhist monasteries of various periods and Muslim Mosques of the medieval period as well as presence of the Buddhist Stupa and monasteries at Taxila from 1st to 5th century A.D. To redress the issue of growing wild vegetation (bio-deterioration) at the sites of Sirkup and Sirsukh, Bhirmound, Dharmarajika and Giri causing deterioration to the structure, UNESCO Islamabad is working closely with the Department of Archaeology Punjab and Comsats Institute of Information Technology (CIIT) through capacity building and awareness raising of the staff on conservation methods against bio-deterioration for the protection of the sites.

On her arrival at the National Institute of Folk and Traditional Heritage (Lok Virsa) – showing the richness of the intangible heritage of Pakistan and its links with the traditions of the neighbouring countries - the Director-General was received by Saeed Nazir, Secretary Information, Broadcasting and National Heritage and Mashhood Ahmad Mirza, Joint Secretary National Heritage Wing. The Director-General was accompanied by the officials to the Lok Virsa Museum galleries which she observed with a keen interest. She later appreciated the efforts made by the Museum authority in maintaining and representing the rich cultural heritage of Pakistan.

“The cultural richness and diversity of Pakistan is the foundation of inclusive citizenship. It shows that there is no such thing as “pure” culture in the world: culture interacts, culture influence and talk to each other, like the Buddha with the Greek hairdo I could see in the museum of Taxila, like music and songs of Pakistan, which are nurtured by the traditions of central Asia and which, in turn, influence them. Preserving and promoting this heritage will give Pakistani people the strength and confidence to promote peace and dialogue.”

The Director-General spent some time watching a folk dance performed by local artists, which was followed by a lunch meeting with the Secretary, Joint Secretary of the Museum and other staff and representatives at the Lok Virsa Museum. Lok Virsa is the first Museum of ethnology in Pakistan which presents the history and living traditions of the people of Pakistan both from the mainstream and the remotest regions of the country. The museum has a covered area of 60,000 square feet exhibiting 9 halls or galleries titled as, Antiquity and Continuity, Textile and Embroidery, Sufi and Shrines, Musical Heritage, Architectures and Woodwork, Jewelry and Metalwork, Ballads and Romances, Ethnic Tribes and Thematic Exhibition, which displayed diverse and wide variety of Cultural Heritage of Pakistan making it the largest ethnological museum in Pakistan.

UNESCO Islamabad is currently implementing a pilot project on integrating Intangible Cultural Heritage into teaching and learning in collaboration with the Ministry. The project includes developing and testing the guidelines to integrate ICH into teaching and learning in schools. The cultural practices of the tradition bearers and practitioners are linked with formal school system in order to help the younger generation learn about the cultural knowledge and wisdom. UNESCO also provides support to the Ministry to establish a database of cultural assets.